The unbearable hypocrisy of being a GOP "deficit hawk" 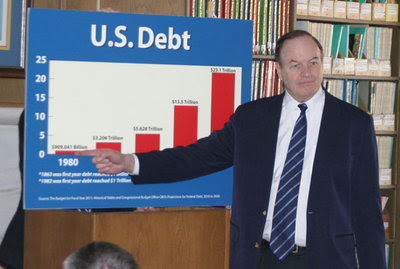 Exhibit A:
Sen. Richard Shelby, Republican, Alabama
At left we have Sen. Shelby expressing his concern over mounting deficits, by pointing his finger at the year before they began growing out of control - 1980. 1980 was, of course, the year the great anti-government fiscal conservative Ronald Reagan was elected President - and proceeded to initiate the Gospel of Tax Cuts, a scheme hatched by the economic elites and which got the federal  deficit ball rolling big-time.
Thank you Senator Shelby, for reminding us of "the good old days" before the GOP's "Starve the Beast!" strategy to break government took hold.
Currently Shelby - when he's not attacking consumer advocate Elizabeth Warren or fighting regulation of the banking industry - is railing against the dangers of the deficit with public statements such as this:


“Washington must put its fiscal house in order. American taxpayers are rightly infuriated by the federal government’s disregard for the same economic principles that govern every household and business budget.”

Aside from the nonsensical simplification that the federal government should adhere to identical budgeting principles as "every household," at least let's acknowledge that's a clearly expressed point of view.
But behind the hot air, we find "fiscal conservative" Shelby inserting the pork-barrel “Shelby provision” into the 2010 budget extension.  The "Shelby provision" forces NASA to spend $1.4 million daily on the Constellation moon program, which it already canceled and doesn’t even want:

Congress has again failed to rid a temporary spending bill of language forcing NASA to waste $1.4 million a day on its defunct Constellation moon program. [...]
This so-called “Shelby provision” — named for U.S. Sen. Richard Shelby, R-Alabama, who inserted it into the 2010 budget — is expected to cost NASA roughly $29 million during the three-week budget extension through April 8. It has already cost the agency nearly $250 million since Oct. 1.   (Chicago Tribune via Think Progress.)

Further,  Shelby was a proponent of the Bush tax cuts that ran up deficits dramatically over the last decade and recently pushed for extending the tax cuts for the upper 1% economic elite. While it is tempting to state that Shelby never saw a tax cut he didn't like, no matter the cost to the economy, he did vote AGAINST the tax cuts for middle and lower income families that comprised 1/3 of President Obama's stimulus package. And while he was elected by the voters of Alabama, Shelby is one of the most reliable representatives of Bankistan in the Beltway, having voted to block three recent amendments to regulate banks, one to cap ATM fees at $0.50 per transaction, and also one to bar banks who borrowed tax payer money through TARP funds to use those funds for their own benefit.
Regarding the pork-barrel "Shelby provision," of course the defense contractors who are getting most of the bucks are based in the Senator's home state  (as well as in Utah, which explains why that other GOP "deficit hawk," Utah Sen. Orrin Hatch, is Shelby's partner in this spending scheme,)
Shelby is typical of the GOP's current crop of "fiscal conservatives" who want to gut social spending, create phony hysterics around Social Security and lay off public employees as part of their "Deficit Hawk" Kabuki,  while they continue to cut taxes on the economic elite and hand out multi-million dollar government perks to their special-interest backroom buddies. Unbearable hypocrisy. These characters have driven "fiscal conservatism" - and increasingly our country - into a ditch. It's past time to call them on their BS.


(Thanks to Think Progress for putting us onto this one.)
Posted by Bruce Schmiechen at 3/28/2011