In recent decisions, the conservative majority on the Supreme Court has made clear its view that corporations are people, with all the attendant rights. They are entitled to free speech, which in their case means spending lots of money to bend the political process to their ends. They are entitled to religious beliefs, including those that mean denying benefits to their workers...

There is, however, one big difference between corporate persons and the likes of 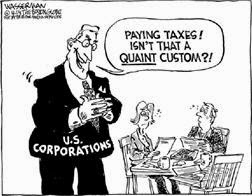 you and me: On current trends, we’re heading toward a world in which only the human people pay taxes.

The federal government still gets a tenth of its revenue from corporate  profits. But it used to get a lot more — a third of revenue came from profits taxes in the early 1950s, a quarter or more well into the 1960s.... Part of the decline since then reflects a fall in the tax rate, but mainly it reflects ever-more-aggressive corporate tax avoidance — avoidance that politicians have done little to prevent.

Which brings us to the tax-avoidance strategy du jour: “inversion.” This refers to a legal maneuver in which a company declares that its U.S. operations are owned by its foreign subsidiary, not the other way around, and uses this role reversal to shift reported profits out of American jurisdiction to someplace with a lower tax rate...

A NYT article reported on a study from Russell Sage reporting that median household the study is that median wealth is down by around 20 percent from 1984.

wealth was 36 percent lower in 2013 than 2003. While this is disturbing, an even more striking finding from

This is noteworthy because this cannot be explained as largely the result of the collapse of house prices that triggered the Great Recession. This indicates that we have gone thirty years, during which time output per worker has more than doubled, but real wealth has actually fallen for the typical family. It is also important to realize that the drop in wealth reported in the study understates the true drop since a typical household in 1984 would have been able to count on a defined benefit pension. This is not true at present, so the effective drop in wealth is even larger than reported by the study. (Defined benefit pensions are not included in its measure of wealth.)
Posted by Bruce Schmiechen at 7/31/2014 No comments: Links to this post


The standard argument against a higher minimum wage is that it will lead to job loss as employers, unable to pay more, lay off current workers or don’t hire new ones. 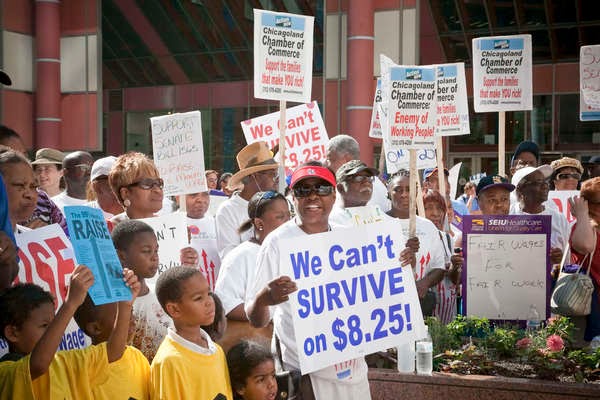 It’s important to state up front that research and experience don’t bear that out.

Bolstering what we already know, new evidence shows that job creation is faster in states that have raised their minimum wages. The Center for Economic and Policy Research used federal labor data to tally job growth in 13 states* that raised their minimums in 2014. In all but one, New Jersey, employment was higher in the first five months of 2014 (after the wage increase) than it was in the last five months of 2013 (before the wage increase). In nine of the 12 states with faster growth, employment gains were above the national median.

Credit where credit is due - conservative tells right-wing inflation hysterics to accept the fact of low inflation and shut up !

Are conservatives forever and always doomed to be obsessed by fear that inflation is perpetually just around the corner? Perhaps, since it was the Great Inflation of the 1970s that helped give rise to Reagan and Thatcher and the conservative revival. Even worse, this inflation obsession spawns conspiracy theories that government is manipulating the data to hide skyrocketing prices.

Job creation and tax increases - evidence from the real world


Dire predictions about jobs being destroyed spread across California in 2012 as voters debated whether to enact the sales and, for those near the top of the income ladder, stiff income tax increases in Proposition 30. Million-dollar-plus earners face a 3 percentage-point increase on each additional dollar.

So what happened after voters approved the tax increases, which took effect at the start of 2013?

Last year California added 410,418 jobs, an increase of 2.8 percent over 2012, significantly better than the 1.8 percent national increase in jobs.

California is home to 12 percent of Americans, but last year it accounted for 17.5 percent of new jobs, Bureau of Labor Statistics data shows.

America has more than 3,100 counties and what demographers call county equivalents. Eleven California counties, including Sacramento, accounted for almost 1 in every 7 new jobs in the U.S. last year.

California raises taxes and recovers from fiscal crisis, while the right-wing fiddles and burns

The states, Justice Brandeis famously pointed out, are the laboratories of democracy. And it’s still true. For example, one reason we knew or should have known that Obamacare was workable was the post-2006 success of Romneycare in Massachusetts. More recently, Kansas went all-in on supply-side economics, slashing taxes on the affluent in the belief that this would spark a huge boom; the boom didn’t happen, but the budget deficit exploded, offering an object lesson to those willing to learn from experience.

And there’s an even bigger if less drastic experiment under way in the opposite direction.

California has long suffered from political paralysis, with budget rules that allowed an increasingly extreme Republican minority to hamstring a Democratic majority; when the state’s housing bubble burst, it plunged into fiscal crisis. In 2012, however, Democratic dominance finally became strong enough to overcome the paralysis, and Gov. Jerry Brown was able to push through a modestly liberal agenda of higher taxes, spending increases and a rise in the minimum wage. California also moved enthusiastically to implement Obamacare.

I guess we’re not in Kansas anymore. (Sorry, I couldn’t help myself.)

Needless to say, conservatives predicted doom. A representative reaction: Daniel J. Mitchell of the Cato Institute declared that by voting for Proposition 30, which authorized those tax increases, “the looters and moochers of the Golden State” (yes, they really do think they’re living in an Ayn Rand novel) were committing “economic suicide.” Meanwhile, Avik Roy of the Manhattan Institute and Forbes claimed that California residents were about to face a “rate shock” that would more than double health insurance premiums.

What has actually happened? There is, I’m sorry to say, no sign of the promised catastrophe.


On July 7, Moore published an op-ed in The Kansas City Star attacking economic policies favored by Nobel Prize-winning economist Paul Krugman. The op-ed claimed that "places such as New York, Massachusetts, Illinois and California ... are getting clobbered by tax-cutting states." Moore went on to attack liberals for "cherry-picking a few events" in their arguments against major tax cuts, when in fact it was Moore who cited bad data to support his claims.
On July 24, The Kansas City Star published a correction to Moore's op-ed, specifically stating that the author had "misstated job growth rates for four states and the time period covered." The editorial board of the Star inserted this annotation to Moore's inaccurate claims:


Please see editor's note at the top of this column. No-income-tax Texas gained 1 million jobs over the last five years, California, with its 13 percent tax rate, managed to lose jobs. Oops. Florida gained hundreds of thousands of jobs while New York lost jobs. NOTE: These figures are incorrect. The time period covered was December 2007 to December 2012. Over that time, Texas gained 497,400 jobs, California lost 491,200, Florida lost 461,500 and New York gained 75,900. Oops. Illinois raised taxes more than any other state over the last five years and its credit rating is the second lowest of all the states, below that of Kansas! (emphasis original)

On July 25, Star columnist Yael Abouhalkah explained the correction in more detail. Abouhalkah wrote that Moore had "used outdated and inaccurate job growth information at a key point in his article" and that Moore should have used data from 2009 to 2014, rather than from 2007 to 2012. Abouhalkah also argued that "the problems with Moore's opinion article damaged his credibility on the jobs issue."