The Tragedy of Long-Term Unemployment

THE American economy is experiencing a crisis in long-term unemployment that has enormous human and economic costs. 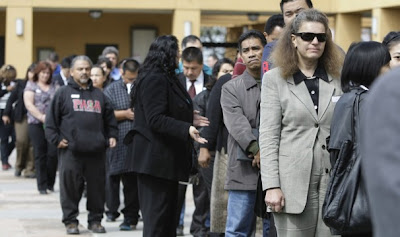 In 2007, before the Great Recession, people who were looking for work for more than six months — the definition of long-term unemployment — accounted for just 0.8 percent of the labor force. The recession has radically changed this picture. In 2010, the long-term unemployed accounted for 4.2 percent of the work force. That figure would be 50 percent higher if we added the people who gave up looking for work.

Long-term unemployment is experienced disproportionately by the young, the old, the less educated, and African-American and Latino workers.

While older workers are less likely to be laid off than younger workers, they are about half as likely to be rehired. One result is that older workers have seen the largest proportionate increase in unemployment in this downturn. The number of unemployed people between ages 50 and 65 has more than doubled.
The prospects for the re-employment of older workers deteriorate sharply the longer they are unemployed. A worker between ages 50 and 61 who has been unemployed for 17 months has only about a 9 percent chance of finding a new job in the next three months. A worker who is 62 or older and in the same situation has only about a 6 percent chance. As unemployment increases in duration, these slim chances drop steadily.

The result is nothing short of a national emergency. Millions of workers have been disconnected from the work force, and possibly even from society. If they are not reconnected, the costs to them and to society will be grim.