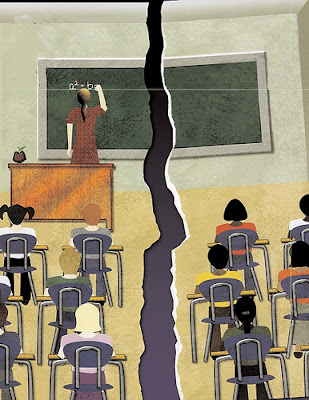 Education was historically considered a great equalizer in American society, capable of lifting less advantaged children and improving their chances for success as adults. But a body of recently published scholarship suggests that the achievement gap between rich and poor children is widening, a development that threatens to dilute education’s leveling effects.

It is a well-known fact that children from affluent families tend to do better in school. Yet the income divide has received far less attention from policy makers and government officials than gaps in student accomplishment by race.
Now, in analyses of long-term data published in recent months, researchers are finding that while the achievement gap between white and black students has narrowed significantly over the past few decades, the gap between rich and poor students has grown substantially during the same period.
“We have moved from a society in the 1950s and 1960s, in which race was more consequential than family income, to one today in which family income appears more determinative of educational success than race,” said Sean F. Reardon, a Stanford University sociologist. Professor Reardon is the author of a study that found that the gap in standardized test scores between affluent and low-income students had grown by about 40 percent since the 1960s, and is now double the testing gap between blacks and whites.
In another study, by researchers from the University of Michigan, the imbalance between rich and poor children in college completion — the single most important predictor of success in the work force — has grown by about 50 percent since the late 1980s.
The changes are tectonic, a result of social and economic processes unfolding over many decades. The data from most of these studies end in 2007 and 2008, before the recession’s full impact was felt. Researchers said that based on experiences during past recessions, the recent downturn was likely to have aggravated the trend.
“With income declines more severe in the lower brackets, there’s a good chance the recession may have widened the gap,” Professor Reardon said. In the study he led, researchers analyzed 12 sets of standardized test scores starting in 1960 and ending in 2007. He compared children from families in the 90th percentile of income — the equivalent of around $160,000 in 2008, when the study was conducted — and children from the 10th percentile, $17,500 in 2008. By the end of that period, the achievement gap by income had grown by 40 percent, he said, while the gap between white and black students, regardless of income, had shrunk substantially.
Both studies were first published last fall in a book of research, “Whither Opportunity?” compiled by the Russell Sage Foundation, a research center for social sciences, and the Spencer Foundation, which focuses on education. Their conclusions, while familiar to a small core of social sciences scholars, are now catching the attention of a broader audience, in part because income inequality has been a central theme this election season...
One reason for the growing gap in achievement, researchers say, could be that wealthy parents invest more time and money than ever before in their children (in weekend sports, ballet, music lessons, math tutors, and in overall involvement in their children’s schools), while lower-income families, which are now more likely than ever to be headed by a single parent, are increasingly stretched for time and resources...
A study by Sabino Kornrich, a researcher at the Center for Advanced Studies at the Juan March Institute in Madrid, and Frank F. Furstenberg, scheduled to appear in the journal Demography this year, found that in 1972, Americans at the upper end of the income spectrum were spending five times as much per child as low-income families. By 2007 that gap had grown to nine to one; spending by upper-income families more than doubled, while spending by low-income families grew by 20 percent...
The gap is also growing in college. The University of Michigan study, by Susan M. Dynarski and Martha J. Bailey, looked at two generations of students, those born from 1961 to 1964 and those born from 1979 to 1982. By 1989, about one-third of the high-income students in the first generation had finished college; by 2007, more than half of the second generation had done so. By contrast, only 9 percent of the low-income students in the second generation had completed college by 2007, up only slightly from a 5 percent college completion rate by the first generation in 1989.