That the U.S spends a lot of money on health care is a refrain many Americans are familiar with, but the latest health expenditure data from the Organization for Economic Co-operation and Development still are striking. Here’s a graph of health-care expenditure as a percentage of gross domestic product for the 34 member nations of the OECD between 1980 and 2012. As you can see, there’s one country whose expenditure begins to distinguish itself from all the others — the U.S. 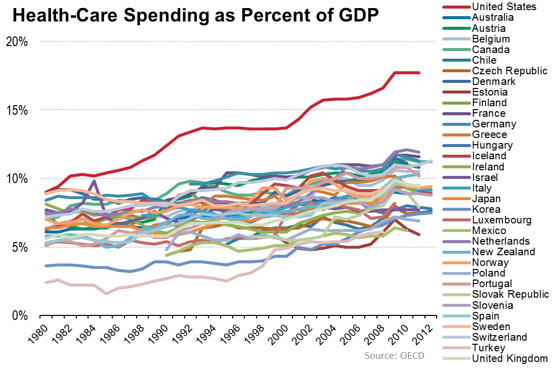 In 2011, the most recent year in which most of the countries reported data, the U.S. spent 17.7% of its GDP on health care, whereas none of the other countries tracked by the OECD reported more than 11.9%. And there’s a debate about just how well the American health-care system works. As the Journal reported recently, Americans are living longer but not necessarily healthier .

Posted by Bruce Schmiechen at 7/25/2013 No comments: Links to this post

"Much of Dodd-Frank is dying on the vine"

The Dodd-Frank financial reform act of 2010 turns three years old this month. But because of intense Wall Street lobbying, only about a third of the provisions it requires have actually been made into rules by Wall Street regulators, and many have gaping loopholes designed by industry lobbyists. A new analysis by the Sunlight Foundation, a non-profit that advocates for government transparency, starkly illustrates why regulatory agencies are so swayed by industry: over the past three years, those whose job it is to police Wall Street have met with big banks 14 times more often than pro-reform groups to discuss proposed Dodd-Frank rules.

The Sunlight Foundation reviewed three years worth of meetings that banks, industry lobbyists, corporations, and financial reform advocacy groups had with the Commodities Futures Trading Commission (CFTC), the Treasury Department and the Federal Reserve, and found that these regulators had met 2,118 times with financial institutions, and only 153 time with pro-reform groups. Here's what that looks like, via the Sunlight Foundation: