The Congressional Republicans have offered up - with great fanfare - a jobs plan that has more the characteristics of a children's book than a serious policy proposal. It's a rehash of everything we've ever heard from them before, dumbed down (if one can imagine such a thing) into a menu with tendentious prologue and peppered up with lots of pictures. 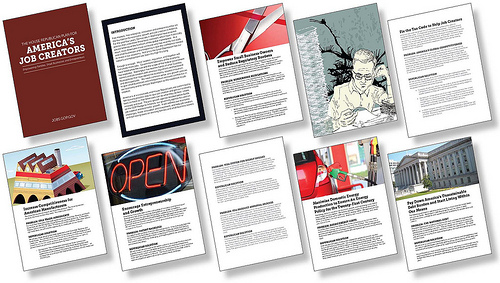 Paul Krugman notes, "There’s so little there there that the document — look at it! — has to rely on extra-large type and lots of pointless pictures to bulk it out even to 10 pages."

Nor are Jamielle Bouie, at American Prospect, and  Ezra Klein at Wonkbook impressed.


House Republicans have released their plan for "America's Job Creators," and it's underwhelming, to say the least. Clocking in at a whopping 10 pages, it begins  by indicting Democrats for high unemployment, conveniently ignoring the last four years of extreme economic hardship, and blames "taxation," "regulation," and "government takeovers of the economy" for the current mess. What follows is eight pages of silly art, large text, and "solutions" that amount to the same failed Republican playbook of tax cuts, tax cuts, and more tax cuts.


Academic books pack about 600 words to a page. Normal books clock in around 400. Large-print books — you know, the ones for kids or the visually impaired — fit about 250. The House GOP’s jobs plan, however, gets about 200 words to a page. The typeface is fit for giants, and the document’s 10 pages are mostly taken up by pictures. It looks like the staffer in charge forgot the assignment was due on Thursday rather than Friday, and so cranked the font up to 24 and began dumping clip art to pad out the plan…

When I asked David Autor, an economist at MIT and a specialist on labor markets, to take a look at the substance, he pronounced it a classic case of “what Larry Summers would call ‘now-more-than-everism.’”