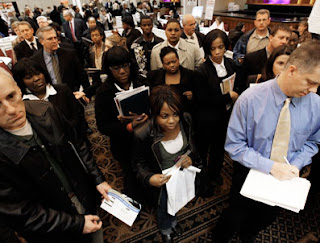 Paul Krugman:  "(P)olicy makers are sinking into a condition of learned helplessness on the jobs issue: the more they fail to do anything about the problem, the more they convince themselves that there’s nothing they could do."

Read the entire critically important column - "Against Learned Helplessness" - HERE.
Posted by Bruce Schmiechen at 5/30/2011 No comments: Links to this post

Email ThisBlogThis!Share to TwitterShare to FacebookShare to Pinterest
Labels: Jobs

Projected increases in health care costs are the biggest problem area in long-run predictions of future deficits. It's common knowledge - at least one would hope - that the US has the least efficient and cost-effective health care insurance and delivery system among peer nations.  Although a variety of systems abroad deliver far better results without reverting to "socialized medicine" - England is the prime example of a fully socialized system - we might look to one fully publicly-run example on our own shores that's working very, very well if we want a window into the option of government-provided health care.

The Veterans Administration Hospitals are a nationwide network of - literally - fully socialized medicine in the United States. And they are consistently rated the best service centers our health care system has to offer. They spend significantly less money per patient and are rated higher than private hospitals by objective measures in numerous studies.

As a reminder of our ongoing commitment to veterans of our armed forces, for Memorial Day I'm offering a  2007 commentary by Ezra Klein on the VHA:


Over the last decade or two, the VHA system has become a worldwide leader in both the adoption and the invention of health-information technology, and it has leveraged its innovations into quantifiable gains in quality of care. As Harvard's Kennedy School noted when awarding the VHA its prestigious Innovations in American Government prize:


[The] VHA's complete adoption of electronic health records and performance measures have resulted in high-quality, low-cost health care with high patient satisfaction. A recent RAND study found that VHA outperforms all other sectors of American health care across the spectrum of 294 measures of quality in disease prevention and treatment. For six straight years, VHA has led private-sector health care in the independent American Customer Satisfaction Index.

Indeed, the VHA's lead in care quality isn't disputed. A New England Journal of Medicine study from 2003 compared the VHA with fee-for-service Medicare on 11 measures of quality. The VHA came out "significantly better" on every single one. The Annals of Internal Medicine pitted the VHA against an array of managed-care systems to see which offered the best treatment for diabetics. The VHA triumphed in all seven of the tested metrics. The National Committee for Quality Assurance, meanwhile, ranks health plans on 17 different care metrics, from hypertension treatment to adherence to evidence-based treatments. As Phillip Longman, the author of Best Care Anywhere, a book chronicling the VHA's remarkable transformation, explains: "Winning NCQA's seal of approval is the gold standard in the health-care industry. And who do you suppose is the highest ranking health care system? Johns Hopkins? Mayo Clinic? Massachusetts General? Nope. In every single category, the veterans health care system outperforms the highest-rated non-VHA hospitals."