The Dangerous Fantasy of Targeting "Deficit Reduction" for Economic Growth

The Great Deficit Hype took a couple of hits in recent days. Tragically, it's not likely that anyone in the Beltway is listening, the priority of deficit reduction has taken such a tenacious hold. 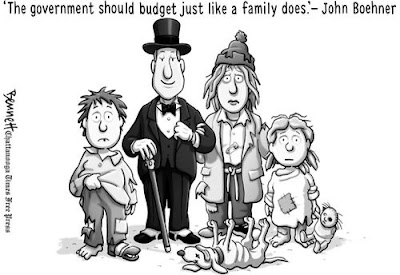 But even in the apparent absence of  rational policy possibilities, it's worth paying attention to some saner voices - and from relatively stodgy circles.

Professor of economics and and former vice-chairman of the Federal Reserve, Alan Blinder, had this warning in the Wall Street Journal (via Economist's View) :


"The Myth of Job-Killing Spending" ...  House Speaker John Boehner and other Republicans regularly rail against "job-killing government spending." ... Using the same illogic, employment should soar if we made massive cuts in public spending—as some are advocating right now.

Acting on such a belief would imperil a still-shaky economy that is not generating nearly enough jobs. So let's ask: How, exactly, could more government spending "kill jobs"? ...

Reagan economic advisor Bruce Bartlett, interviewed by Lawrence O'Donnell, on the Big Republican Lie that "tax cuts pay for themselves":