Last night, Brian Williams asked Romney to distinguish his approach to economic growth from Bush’s. The answer was a mere recapitulation of his plans (“Well, let me describe — actually, there are five things that I believe are necessary to get this economy going … ”). I won’t reprint the entire answer, but Romney did not make the slightest attempt to distinguish his approach from Bush’s. Of course that is because it’s the same thing! Every single idea Romney listed — low taxes, free trade, less regulation, developing energy, etc. — was part of Bush’s program.

Now, the usual Republican answer here, on how their approach will succeed where Bush’s failed, is to shout, spending! Romney promises to cut it. Bush also promised to cut it, but didn’t. I don’t think this really answers the main objection — lower spending may help the long-term budget picture, but the policies Republicans most directly associate with economic growth are taxes, regulation, and energy. And here Romney really is proposing the exact same policies as Bush.

At this point, getting video clips of President Obama from Republican campaigns is like getting an article pitch from Jayson Blair. It might tell a good story, but you need to run down the source and triple-check. Jim Geraghty points to our latest example, a rapid-response video from the RNC that clips Obama's speech from Oakland.

Just like we’ve tried their plan, we tried our plan—and it worked. That’s the difference. That’s the choice in this election.  That’s why I’m running for a second term. 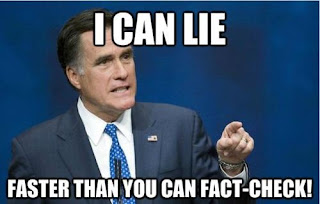 Pretty stupid! As Geraghty points out, with a smorgasboard of links, the economy is still horrible three-and-a-half years after Obama took office. But what was the rest of the quote?

I'll cut out government spending that’s not working, that we can’t afford, but I’m also going to ask anybody making over $250,000 a year to go back to the tax rates they were paying under Bill Clinton, back when our economy created 23 million new jobs, the biggest budget surplus in history and everybody did well. Just like we’ve tried their plan, we tried our plan -- and it worked. That’s the difference. That’s the choice in this election. That’s why I’m running for a second term.

What are the chances? Another radical Obama quote that's just a clipped version of something all Democrats believe. Obama wasn't talking, at this moment, about his own economic record. He was arguing that the economy had grown and the deficit had shrunk when marginal tax rates were higher. (Of course he doesn't want to raise all those rates, which undercuts his point about the deficit.) This is a bog-standard part of the 2012 message. "The President also believes that the top 2% should return to Clinton-era income tax rates," said David Plouffe this month, "when the United States created 23 million jobs and ran the biggest budget surplus in history." Obama has tried a bunch of things, but Clinton-era tax rates on income over $250,000 is not among them.


So the truncated version of the Obama quote is insanely misleading. At best, it'll only appear in $10.4 million or so of TV ads.