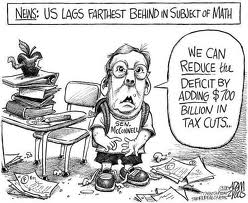 The GOP's knee-jerk response to every problem is "lower taxes."  We hear it over and over and over again. Tax cuts are the cure-all.  And in response to the deficits that their fetish for tax cuts has created, the notion of raising revenue is the only option that is forbidden in this dogmatic agenda. Anything else, no matter how noxious or insane, is "on the table" - which is why we've got proposals like killing Medicare being floated.

The biggest lie in the GOP's "cut taxes" litany is that high taxes are causing unemployment, and that further cutting taxes for wealthy "job creators" is the key to recovery.  But the reality is that effective  tax rates are already the lowest they've been since before the Korean War.


Historically, the term “tax rate” has meant the average or effective tax rate — that is, taxes as a share of income. The broadest measure of the tax rate is total federal revenues divided by the gross domestic product.

By this measure, federal taxes are at their lowest level in more than 60 years. The Congressional Budget Office estimated that federal taxes would consume just 14.8 percent of G.D.P. this year. The last year in which revenues were lower was 1950, according to the Office of Management and Budget.

In short, by the broadest measure of the tax rate, the current level is unusually low and has been for some time. Revenues were 14.9 percent of G.D.P. in both 2009 and 2010.

Yet if one listens to Republicans, one would think that taxes have never been higher, that an excessive tax burden is the most important constraint holding back economic growth and that a big tax cut is exactly what the economy needs to get growing again.

Email ThisBlogThis!Share to TwitterShare to FacebookShare to Pinterest
Labels: Taxes

Joe Nocera at the New York Times on "The Good Banker":


For nearly 30 years, (Robert G.) Wilmers has run the M&T Bank, based in Buffalo. When he took it over, M&T had $2 billion in assets; today, its assets exceed $68 billion, and it’s one of the most highly regarded regional bank holding companies. It has also been one of the best performing stocks in the Standard & Poor’s 500-stock index; indeed, M&T was one of only two banks in the S.& P. 500 that didn’t cut its dividend during the financial crisis….

Wilmers, it turns out, is that rarest of birds: a banker willing to tell harsh truths about banking. That, for instance, much of the money the big banks earn comes from trading profits “rather than the prudent extension of credit that furthers commerce.”  ...   “It has become a virtual casino,” (according to Wilmers.)  “To me, banks exist for people to keep their liquid income, and also to finance trade and commerce.” Yet the six largest holding companies, which made a combined $75 billion last year, had $56 billion in trading revenues. “If you assume, as I do, that trading revenues go straight to the bottom line, that means that trading, not lending, is how they make most of their money,” he said.

Email ThisBlogThis!Share to TwitterShare to FacebookShare to Pinterest
Labels: The Banksters

"Them that's got shall get, them that's not shall lose..."

Pat Garofolo at Think Progress has it: 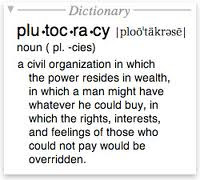 
Over the past decade the too-big-to-fail banks have showered a staggering $1.15 billion in cash and stock on a changing cast of hard-charging if inept chief executives, according to regulatory filings. That works out to an average paycheck of $19 million a year – this in a decade in which the biggest banks ripped off everyone in sight on their way to very nearly turning the lights out on the U.S. economy...

It’s not only in the banking industry that CEO pay has come roaring back. In 2010, median CEO pay climbed 27 percent. Median CEO compensation last year was $9 million, the highest since 2007, while the average CEO bonus grew by nearly 20 percent. CEOs at America’s largest companies now earn 343 times more than the typical worker. In 1970, the average CEO earned 28 times as much as the typical worker.

This disparity is contributing towards America’s sky-high income inequality, which is currently the worst its been since the 1920s. Currently, the top one percent of households make nearly 25 percent of the total income in the country, after they made less than 10 percent in the 1970s. Between 1980 and 2005, “more than 80 percent of total increase in Americans’ income went to the top 1 percent.”

Posted by Bruce Schmiechen at 5/31/2011 No comments: Links to this post

Posted by Bruce Schmiechen at 5/31/2011 No comments: Links to this post