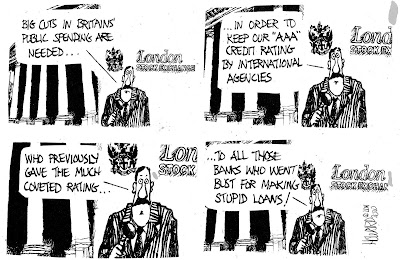 Via Dan O at Beautiful Horizons, we have this New Deal 2.0 piece by Marshall Auerback of the Roosevelt Institute, focusing on the global economic downturn made worse by fiscal austerity politics. The evidence that an agenda targeting deficit spending as the "problem" - when economic growth is sluggish and unemployment still hangs just below double digits - actually digs economies deeper in the hole of recession is increasingly apparent in the experience from austerity regimes in Europe, where countries like Ireland are in the grip of deflation with no end in sight.

Here at home, the GOP is pushing austerity politics like patent medicine, but far too many Democrats - including the White House - are also buying in, proposing policies that merely dilute a deficit-centered agenda or tweak it at the margins, rather than providing a compelling counter-narrative based not simply on ideology or partisan politics, but on the evidence from abroad. One hopes that we might learn from the picture Auerback lays out, but I'm not very optimistic. Meanwhile, as Auerback notes, "Governments across the globe are headed for a disaster entirely of their own making":

Though capital markets remain strong, the global economic backdrop continues to deteriorate as fiscal retrenchment takes hold. Commodity markets have rallied in tandem with the fall in the dollar even though there are signs that growth in the emerging world is slowing. Japan’s economy is in the soup, the U.S. economy has failed to pick up as many thought (with a mere 2% growth rate expected to be released for Q1 shortly), and the European economy is overdue for its own slowdown. The U.S. stock market has also rallied despite the threat of a very high gasoline price, disappointing economic growth data, and a fairly mixed earnings picture.

The new theme in the market seems to be that the Fed, unlike other central banks, will stick with super easy money policies, hence the tendency to push the weak dollar, rising equity prices, and soaring commodity prices. But the news that real GDP growth has fallen sharply in the first three months of 2011 is evidence that the current policy mix, with its emphasis on public spending cuts, is not working. If gasoline prices spike as high as they did in June 2008, they will further weaken an already feeble economy. Consumers did not show up at Walmart at the end of the month because they ran out of money. House prices are still falling.

At the same time, the political debate is focused on the public debt limit, which expires in a few weeks. Conservatives are once again threatening not to extend this limit, even though no less a figure than Warren Buffett has said the failure to do so would be the “most asinine act” the U.S. Congress has ever committed.

The evidence of an increasingly imploding euro zone (which continues to embrace fiscal austerity with the zeal of a religious fanatic) does not seem to have shifted the debate much in this country. Many European governments are facing a fiscal crisis due to their failure to advance public purpose and raise the funds needed to maintain existing programs. Only the interventions of the ECB are saving the whole system from total meltdown, but the underlying solvency problem for the individual member states is getting worse as the days go by. The Euro bosses are failing, and with any luck, so is political resistance to rational economic policy.