Eye of the Newt 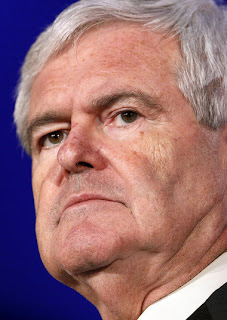 Newt Gingrich is a chameleon-like charlatan who appears to constantly reinvent himself for his audience du jour, in variations on his persistent grandiosity, pretensions to power and ambition to accumulate wealth. His conduct in the GOP debates has been a study in resentment honed into startlingly effective demagogy. But there's really  nothing new here. Lest we forget one of his more shameless recent-but-pre-GOP-primary moments of shabby moral dissolution - having nothing to do with ex-wives - Charles Blow, at The New York Times, reminds us:


In September 2010, he told the National Review Online that President Obama followed a “Kenyan, anti-colonial” worldview. Gingrich continued, “I think he worked very hard at being a person who is normal, reasonable, moderate, bipartisan, transparent, accommodating — none of which was true.”

Gingrich was commenting on a Forbes article by Dinesh D’Souza, the president of the King’s College in New York City. In the article, D’Souza said of President Obama:

“Our president is trapped in his father’s time machine. Incredibly, the U.S. is being ruled according to the dreams of a Luo tribesman of the 1950s. This philandering, inebriated African socialist, who raged against the world for denying him the realization of his anti-colonial ambitions, is now setting the nation’s agenda through the reincarnation of his dreams in his son.”

Gingrich called the article the “most profound insight I have read in the last six years about Barack Obama.”

Ironically, what Newt was offering us was a profound insight into his own lack of intellectual integrity or moral boundaries, which would come to full fruition in his more recent conduct as a presidential aspirant.
Posted by Bruce Schmiechen at 1/22/2012 No comments: Links to this post