GOP Pols, Right-Wing Billionaires, Chinese "Communists" and the art of having it every which way in the citadels of Money & Power. 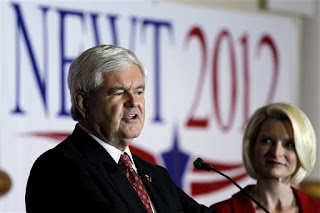 According to a 2008 New Yorker article on Sheldon Adelson - Newt Gingrich's financial angel in the GOP primaries and current poster boy for post-"Citizens United" unrestricted campaign spending - the cagy casino mogul knows well how the game of money and politics is played, and with much bigger stakes than the career of a disgraced former House Speaker.

In 2001 Adelson - well known for his right-wing views and close ties to GOP politicians - met with the mayor of Beijing in the course of promoting his Las Vegas Sands Inc. casino business to the Chinese ruling group. Adelson saw his entrprise as a perfect fit for the island of Macao, a former Portugese colony which is controlled as a "special administrative region" by China and which had been exempted from the Communist Party's bans on gambling.

But the Beijing mayor brought up an apparently unrelated concern - legislation pending in Congress criticizing China's human rights record, that was targeted in opposition to Beijing hosting the 2008 Summer Olympic Games.  The official asked if the politically-connected Adelson could do anything to block this US legislation as a favor to the Communist Party-controlled government he was lobbying to open China's doors to his casino business?

According to The New Yorker (citing testimony in court documents filed in an eventual lawsuit when one of Adelson's presumed business partners alleged he had been ripped off by the casino mogul):


Adelson said in court he immediately made calls on his cell phone to Republican friends in Congress—including Tom DeLay, then the majority whip—who had received generous support from Adelson. DeLay told him that there was indeed a resolution pending about China and the Olympics.

Representative Tom Lantos, then the highest-ranking Democrat on the House International Relations Committee, had introduced a resolution opposing China’s Olympic bid, saying, “China’s abominable human rights record violates the spirit of the games and should disqualify Beijing from consideration.”