The failure of the "war on religion" demagogy 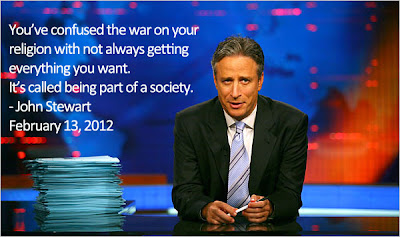 Ed Kilgore at Washington Monthly on the Catholic vote and the failure of the Church hierarchy's hysterics and demagogy:


A dog that definitely did not bark on November 7th was the once-very-intense Republican effort to “wedge” Catholic voters with claims the Obama administration was waging a “war on religion,” notably via the allegedly insufficient exemptions it offered to a contraception coverage mandate created by Obamacare. Obama won Catholics by a 50-48 vote, almost exactly his margin among voters generally, and continuing Catholic voters’ very close similarity to the electorate as a whole. The failure of the “war on religion” effort is all the more remarkable since it received tactic (and in some cases overt) support from the Catholic hierarchy, particularly via the U.S. Conference of Catholic Bishops’ “Fortnight for Freedom” campaign during the spring, aimed at mobilizing the faithful against the contraception mandate.
In a thoughtful piece for the National Catholic Reporter on Election Eve, Maryland parish priest Fr. Peter Daly examined the failure of the “Fortnight for Freedom,” and basically schooled the bishops:


Our Catholic bishops started out leading a political parade in the spring. But when they looked behind them in the fall, they discovered that almost nobody was following. What happened?

A few groups got in line. The Knights of Columbus were very active. EWTN had several programs devoted to Fortnight. There were some rallies around the country. A lot of money was spent on pamphlets and videos. There was an opening Mass in Baltimore and a closing Mass in Washington, D.C. But there was hardly any talk about it in the pews. The average Catholic hardly even noticed a Fortnight for Freedom was happening.

Why didn’t this movement catch fire? Four reasons, I think.