The Ayn Rand fan club, "Atlas Society", has done the country a real service in releasing a transcript of Veep wannabe Paul Ryan's 2005 talk in praise of the pop novelist and self-styled "philosopher." This speech is not some youthful indiscretion, but insights into his intellectual, political and moral development well into his third congressional term. The (numbers) mark time into the audio recording of Ryan's remarkable self-revelation - one which not too surprisingly he has recently attempted to disavow in a predictable act of cowardice:

(1:45) I just want to speak to you a little bit about Ayn Rand and what she meant to me in my life and [in] the fight we’re engaged here in Congress. I grew up on Ayn Rand, that’s what I tell people..you know everybody does their soul-searching, and trying to find out who they are and what they believe, and you learn about yourself. 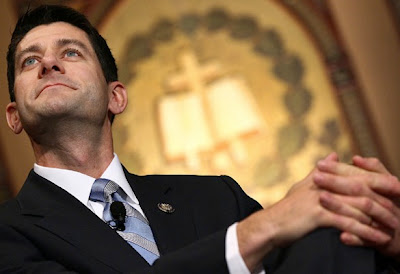 (2:01) I grew up reading Ayn Rand and it taught me quite a bit about who I am and what my value systems are, and what my beliefs are. It’s inspired me so much that it’s required reading in my office for all my interns and my staff. We start with Atlas Shrugged. People tell me I need to start with The Fountainhead then go to Atlas Shrugged [laughter]. There’s a big debate about that. We go to Fountainhead, but then we move on, and we require Mises and Hayek as well.
(2:23) But the reason I got involved in public service, by and large, if I had to credit one thinker, one person, it would be Ayn Rand. And the fight we are in here, make no mistake about it, is a fight of individualism versus collectivism.