Paul Ryan has emerged from his long post-election period of repositioning, soul-searching, and secretly but not secretly visiting the poor. He had been caricatured as an Ayn Rand miser and attacked as a social Darwinist, merely for proposing the largest upward transfer of wealth in American history. Ryan has identified the root cause of his difficulties, and it is fiscal arithmetic.

The new Ryan, now fully formed, emerges in an interview with Philip Klein that 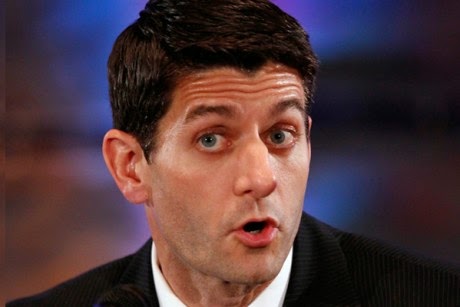 is revealing precisely for its evasiveness. The overview of Ryan’s new strategy must be pieced together from several elements.

1. Tax cuts for all! Ryan has found himself caught between his career-long obsession with cutting taxes for the rich and the problem of what happens to the revenue that would be lost. During the 2012 campaign, he swept aside the problem by couching his plan as “tax reform,” promising not to cut taxes for the rich. Ryan’s new plan is just to go ahead and cut taxes.

He tells Klein, “Those of us who live in the tax system want to lower everybody’s tax rates.” If you lower everybody’s tax rates, then everybody will be paying less in taxes, and then the government will have less revenue, right? That’s where Ryan’s solution comes in: He plans to press the government budget agencies to adopt the optimistic assumption he prefers, which is that cutting tax rates for the rich creates faster economic growth. Ryan spent much of the Bush years assailing what he called “static scoring,” which is the standard budget practice of measuring the fiscal impact of tax cuts as if they do not contain magic pixie dust.

As Danny Vinick has noticed, Ryan has announced his intention to change the rules. Ryan reaffirmed that plan in his interview with Klein: “I’d like to improve our scorekeeping so it better reflects reality,” he said. “Reality” is Ryan’s description for a world in which Bill Clinton’s punishing tax hikes on the rich hindered the economy, which was restored to health when George W. Bush cut taxes.