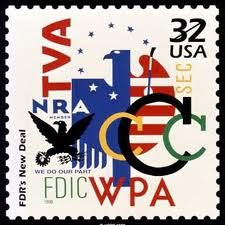 This excerpt, published at Slate courtesy of the Free Press, comes from Michael Hiltzik’s new book, The New Deal: A Modern History.


During the years of the New Deal, America’s government built as it never had before—or has since.

The New Deal physically reshaped the country. To this day, Americans still rely on its works for transportation, electricity, flood control, housing, and community amenities. The output of one agency alone, the Works Progress Administration, represents a magnificent bequest to later generations. The WPA produced, among many other projects, 1,000 miles of new and rebuilt airport runways, 651,000 miles of highway, 124,000 bridges, 8,000 parks, and 18,000 playgrounds and athletic fields; some 84,000 miles of drainage pipes, 69,000 highway light standards, and 125,000 public buildings built, rebuilt, or expanded. Among the latter were 41,300 schools.

The transformative power of this effort is inestimable. The Tennessee Valley in 1933 was a quintessential backwoods region of “grim drudgery, and grind” in the words of its savior George Norris: beleaguered by floods, drained of its manpower by the siren call of the cities, the latent wealth of its river and lumber left fallow. The TVA of Norris and Franklin Roosevelt turned it into a land of plenty that called its workers home, put its natural endowments to productive use, and delivered to its residents the promise of a secure American middle-class lifestyle.

Paul Krugman marvels at the GOP's "adventures in Wonderland": Reading the transcript of Tuesday’s Republican debate on the economy is, for anyone who has actually been following economic events these past few years, like falling down a rabbit hole. Suddenly, you find yourself in a fantasy world where nothing looks or behaves the way it does in real life.

And since economic policy has to deal with the world we live in, not the fantasy world of the G.O.P.’s imagination, the prospect that one of these people may well be our next president is, frankly, terrifying.

In the real world, recent events were a devastating refutation of the free-market orthodoxy that has ruled American politics these past three decades. Above all, the long crusade against financial regulation, the successful effort to unravel the prudential rules established after the Great Depression on the grounds that they were unnecessary, ended up demonstrating — at immense cost to the nation — that those rules were necessary, after all.

But down the rabbit hole, none of that happened.