Niall Ferguson, the egregious blowhard Harvard professor who gets everything wrong, strikes again via the Wall Street Journal with remarkable stupidity. Increasingly it appears Ferguson isn't simply in error, so much as a right-wing troll of the FOX & FRIENDS school of aggressive disinformation. UC economist Brad DeLong takes Fergie apart:


Niall Ferguson: The Shutdown Is a Sideshow. Debt Is the Threat: 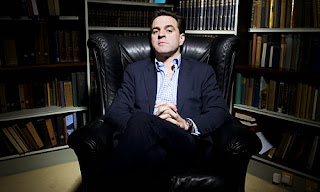 Only a fantasist can seriously believe "this is not a crisis." The fiscal arithmetic of excessive federal borrowing is nasty even when relatively optimistic assumptions are made about growth and interest rates. Currently, net interest payments on the federal debt are around 8% of GDP…

Look at: http://www.cbo.gov/sites/default/files/cbofiles/attachments/44521-LTBO2013.pdf. Currently, net interest payments on the federal debt are not 8% but only one-sixth that--1.3% of GDP: The fantasy is the 8% number, and the belief that the debt is, right now, a crisis.

That's right: rather than the debt forcing us to cut spending on programs below the level of taxes (i.e., run a primary surplus) in order to keep the debt-to-GDP ratio from growing, right now the United States can have spending on programs exceed taxes by 2.3% of GDP (i.e., run a primary deficit) and still keep its debt-to-GDP ratio stable. In terms of real resources, right now the debt is not a burden. It does not reduce how much the U.S. can afford to spend on programs. It is a profit center. It is providing a net addition to federal resources to the tune of 2.3% of GDP.

That's how far the federal debt is today from being a burden on the economy.