Republicans want to raise your taxes! 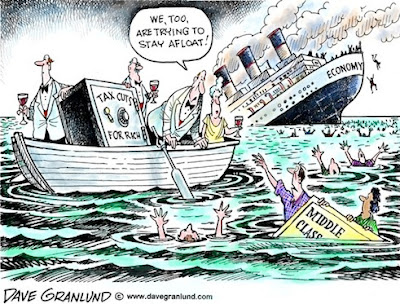 Their tax hike doesn’t apply to income from investments. It doesn’t apply to any wage income in excess of $106,800 a year. It’s the payroll tax that they want to raise — to 6.2 percent from 4.2 percent of your paycheck, a level established for one year in December’s budget deal at Democrats’ insistence. Unlike the capital gains tax, or the low tax rates for the rich included in the Bush tax cuts, or the carried interest tax for hedge fund operators (which is just 15 percent), the payroll tax chiefly hits the middle class and the working poor. 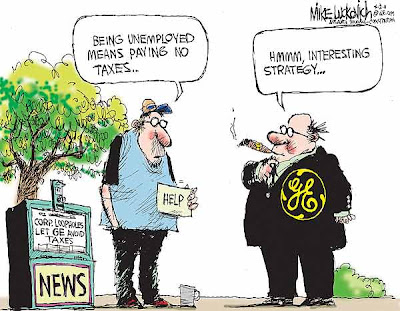 It's been widely reported that General Electric paid no US taxes last year, despite over $14 billion in profits - and over $5 billion profits reported in the US.  GE actually got a $3.2 billion tax credit from the US government.

David Cay Johnston has an interesting column at Reuters about the distribution of GE's tax payments over the last decade that raises some questions about the impact of corporate tax rates on the  company's activities. The US has offered GE lower effective tax rates than it's foreign operations, but GE has been reporting more of its profits overseas, where it's been paying higher taxes. (The fact that GE pays much lower taxes than the supposed US corporate tax rate is also instructive.)  This trend of their reported profits shifting overseas where the corporate rates are effectively higher for GE counters the "conventional wisdom" about how taxes drive the investment decisions of a major global business: