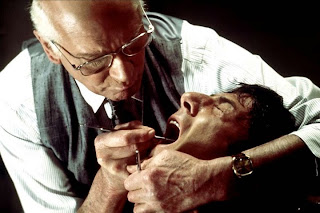 Thomas Edsall at the NYTs on the politics of austerity:


The economic collapse of 2008 transformed American politics. In place of shared abundance, battles at every level of government now focus on picking the losers who will bear the costs of deficit reduction and austerity.

Fights in Washington are over inflicting pain on antagonists either through spending cuts or tax increases, a struggle over who will get a smaller piece of a shrinking pie. This hostile climate stands in sharp contrast to the post-World-War II history of economic growth. Worse, current income and employment trends suggest that this is not a temporary shift.

The year 2008 marked the emergence of a Democratic Party driven by surging constituencies of minorities, single women and voters under 30. The flowering of this coalition, manifested in the election of President Obama and in continued Democratic control of Congress, was quickly followed by developments affirming the activist, redistributive state: the enactment of a $787 billion economic stimulus bill, passage of the $900 billion health care reform act and rising demand for food stamps, unemployment compensation and Medicaid...

As the national debt grew from $10.6 trillion when Obama took office to $13.7 trillion on Election Day 2010, the stage was set for a conservative revival. Conservatives successfully shifted the focus of American politics to the twin themes of debt and austerity — with a specific attack on means-tested entitlement programs.

The Republican Party, after winning back control of the House in 2010, has reverted to the penny-pinching of an earlier era, the green eyeshade Grand Old Party of Herbert Hoover and Robert Taft, advocating a “root canal” approach to governance…

"Studies show flat taxes are harmful to your health" 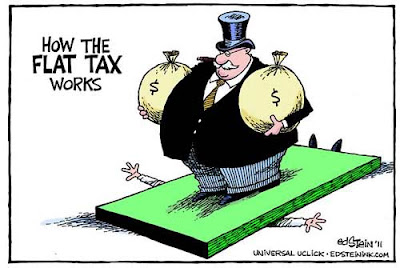 Economist Robert Frank explains at NYT's how the flat tax "would greatly exacerbate longstanding growth in income inequality" and diminish quality of life, health and well-being:

Mr. Cain touted his plan’s simplicity, and many voters were apparently impressed... Rick Perry, the Texas governor, responded with a flat-tax proposal of his own. At this point, Mr. Romney is the only top-tier Republican candidate without some variant of a flat-tax proposal. But give him time.

The contention that a flat tax would be simpler because it involves only a single rate is flatly wrong. The complexity of the current system has nothing to do with its multiple income brackets.

The hard step in figuring your tax bill is to compute your adjusted gross income — roughly, the amount you earn, less the myriad exemptions, deductions and various other offsets described in the 3.4-million-word code of the Internal Revenue Service...

The much more serious concern is that a flat tax would reinforce the trends toward greater income inequality that have been seen over the last several decades.