A record-low 25 percent of unemployed Americans will receive benefits now that Congress has allowed the federal program to expire, according to data from the Department of Labor compiled by House Democrats on the Ways and Means Committee.

The number is the lowest since the Department of Labor began keeping records in 1946. Before Congress let the federal unemployment benefit-assistance plan expire on Dec. 28, 38 percent of unemployed Americans who paid unemployment taxes were receiving unemployment insurance either through their state or the federal government...

A Tale of Two Rands - Unemployment Benefits and Economic Illiteracy

Rand Paul - well-known foe of economic illiteracy - arguing that "extending unemployment benefits to two years does a disservice to the unemployed.":


Economic illiteracy condemns us to well-intentioned, big-hearted, but small-brained 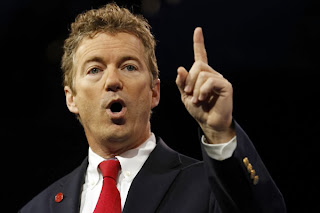 Millions of people are out of work. We all have sympathy for those who are unemployed and I believe it is our moral obligation as a society to take care of those who cannot take care of themselves. Liberal pundits try to argue that Democrats are the only ones who care about the poor and unemployed, but the truth is, caring doesn't help unless it is linked to good policy...

According to a study by Rand Ghayad and William Dickens for the Federal Reserve Bank of Boston, employers will choose a less-skilled worker who has been unemployed for two months over a worker with more skills who has been unemployed for two years. So yes, extending unemployment benefits to two years does a disservice to the unemployed...conservatives who argue for shorter unemployment benefits actually have more concern for the worker than liberals who believe in no limits... (Bold added)


Rand Ghayad, the economist Paul cites, @The Atlantic, countering that based on his research "there's no reason to cut unemployment benefits:


Rand Paul says he cares about the unemployed."...

So why does he want to end unemployment benefits for people who have been out of work for 6 months or longer? Well, Paul cites my work on long-term unemployment as a justification—which surprised me, because it implies the opposite of what he says it does.