Corey Booker, soon-to-be Senator from New Jersey has enormous star-power.  There are things to admire about Booker - he seems to have done a good job as Mayor of Newark against steep odds. He strikes me as slightly ridiculous in the degree of his obsession with ephemeral social media, but that's probably generational.  (Politicians in their mid-40s like Booker tend to be desperate to comport to an older person's notion of what younger potential voters are all about.) 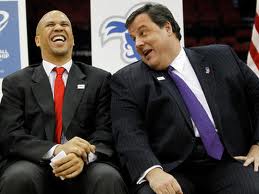 scene - he's way too cozy with the 1%, clearly open to cutting bad deals for the young folks he's eager to impress around their long-term Social Security benefits, babbling right-wing nonsense on the Sunday morning idiot gabfests about deficits as a major problem when we need to be focused on when unemployment has been the burning issue for five years, shamelessly pointing fingers regarding the origins of the financial crisis of 2008 without mentioning the word "banks."

Noam Sheiber @ TNR has a good break-down of Bookers' deep flaws as an incoming high-profile Democrat addressing issues at the national level:

Exactly what kind of senator will Cory Booker make once he coasts to (a near-certain) victory this fall? On the one hand, Booker—the Newark mayor and reigning viceroy of Twitter—has a habit of lionizing the tech and finance executives who are his biggest campaign donors. Last year on “Meet the Press,” he famously criticized President Obama’s “nauseating” assault on the private-equity industry. Booker’s ease around business moguls is such that he betrayed no sheepishness when The New York Times disclosed that several had funded his personal Internet venture, potentially worth millions to him, while he was ensconced in City Hall.