The AFL-CIO has a great new website where you can get data on Fortune 500 CEO pay and information on CEO "pay abuse" which should be addressed by shareholders:

During the past decade, CEOs of the largest American companies received more in compensation than ever before in U.S. history. They supposedly deserved this money for increasing stock prices. Did they? On Dec. 31, 2010, the S&P 500 Index closed 19 percent below its high on March 24, 2000.

Over the past decade, shareholders—including workers—lost trillions of dollars in retirement savings through the collapse of the Internet stock bubble and the corporate accounting scandals at Enron and other companies. More recently, shareholders have suffered further declines from the bursting of the real estate bubble and the Wall Street financial crisis.

While CEO pay is still out of control on Wall Street and in the rest of Corporate America, shareholders now have new tools to fight back. CEOs must now give their shareholders a “say on pay,” thanks to the Dodd-Frank Wall Street Reform and Consumer Protection Act that President Obama signed in July 2010.

Posted by Bruce Schmiechen at 4/20/2011 No comments: Links to this post

Alan S. Blinder, economics professor at Princeton and a former vice-chair of the Federal Reserve, writes of the GOP budget czar's proposal in the Wall Street Journal: 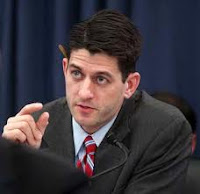 The House Budget Committee's own rack-up of changes from the CBO baseline displays the much-ballyhooed $5.8 trillion in spending cuts over 10 years. But it also displays $4.2 trillion less in tax revenue. How many Americans know that 72% of Mr. Ryan's claimed budget cuts would go to fund tax cuts that overwhelmingly benefit the rich?

Posted by Bruce Schmiechen at 4/20/2011 No comments: Links to this post

I feel like I'm in a mode of constant repetition, but the fundamental flaws and dishonesty of the GOP's "deficit reduction" proposal need to be driven home, at the risk of boring even myself. Jeff Madrick, economics contributor to the New York Review of Books and senior fellow at The Roosevelt Institute, brings a bit of history to take the GOP's budget strategy apart:


Among the economic fallacies embraced in Congressman Paul Ryan’s budget proposal, two are particularly egregious: that getting rid of Medicare will reduce health care costs and that enacting yet further tax cuts for the rich will spur growth and investment...

And herein lies a further misunderstanding. It is true that the main cause of long-term budget deficits today is the expected rapid rise in expenditures for health insurance programs like Medicare and Medicaid (not Social Security, though they are all too often lumped together in the press). But the main reason those programs will become so costly is the rapid expected increase in health care costs in general, not the purported over-generosity of Medicare and Medicaid.

All effort should go into reforming health care. Americans pay far more per person in health care for outcomes that are typically not as good as in many nations that spend far less. In my view, effective health care reform will require much more serious government involvement—certainly not less—in improving efficiency and reducing costs.

As for the tax-cut mantra that it will automatically raise rates of growth, it is hard to believe that this theory has any credibility after the poor performance of the economy since the Bush tax cuts. Yet the Ryan plan would not only retain the Bush cuts for those who earn more than $250,000 a year; it would increase the cut for those who make more.