In the context of a response to column by conservative commentator Ramesh Ponnouru, Paul Krugman @ NYTs makes a compelling case with...uh...data:


Reaganomics was not a success!

Look at median family income. The basic story of postwar America is one of big gains in the first generation, near-stagnation in the second and after, with fluctuation due to the business cycle. And Reagan did not break that pattern: 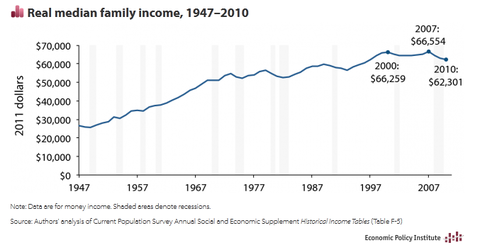 If you want a better assessment, you can look at growth between business cycle peaks. (Peaks are much more similar than troughs; all happy economies are alike, each unhappy economy is unhappy in its own way.) Here’s what you get (treating the 1979-82 double dip as a single recession): 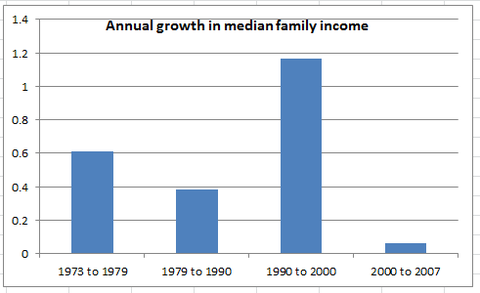 These periods don’t match up neatly with presidential terms. Still, if Reaganomics had been such a spectacular success, you would have expected the results by 1990 to have been families doing better than in the horrible 1970s; actually, not. The only clear things we see here are that the Clinton era was pretty good, while the Bush era was lousy even before the crisis.

Posted by Bruce Schmiechen at 2/21/2013 No comments: Links to this post

Email ThisBlogThis!Share to TwitterShare to FacebookShare to Pinterest
Labels: Annals of Class Warfare, Conservatism in crisis, Reclaiming the narrative

George Packer @ The New Yorker  takes a look at the fragility of the Walmart consumer economy after decades of increasing income inequality and years of Great Recession:


If you were to write a social history of America through the story of business, what would be the most significant companies in the years since the Second World War? I’d divide the period into two: from 1945 to the mid-seventies, I might name General Motors and Woolworth’s. They set the standard for corporate success and behavior during a period that could be called the Roosevelt Republic, when a social contract underwrote American life. It included an expanding middle class, a strong safety net, high marginal tax rates, a white male establishment that grudgingly made way for other groups, a bipartisan approach to legislation in Washington, and a business culture that was cautious, loyal, hierarchical, and unimaginative. 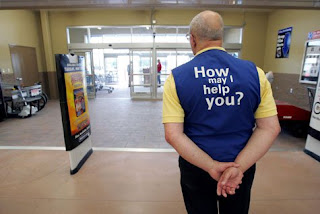 In the decades since the mid-seventies—you could call it the Reagan Republic, but I prefer the “Unwinding”—the social contract has frayed to the point of disintegration. The middle class has shrunk; tax rates (especially on upper brackets) have plunged; inequality has exploded; the safety net (especially for the poor) has weakened; the old power structure has given way to a more diverse and broad-based upper class based on education; bipartisanship—well, you know; and business culture has become entrepreneurial, fast, risk-taking, and harsh. The trade-off: more freedom, less security.

Two companies have defined the years of the Unwinding: one is Apple, the other, Walmart. Steve Jobs’s genius for design and marketing helped create the consumer taste of that educated upper class—the spare, sleek, Bauhaus-inspired devices; the turtlenecks and jeans; the self-congratulatory language of revolution and inspiration; the Einstein fetish—with the Apple Store a kind of secular temple for devotees in prosperous cities and suburbs, mostly along the two coasts.

Jobs’s stylistic and philosophical opposite was Sam Walton. He came out of the heartland, where he saw the potential for a strategy of low cost and high volume in overlooked backwaters like Siloam Springs, Arkansas, and Coffeyville, Kansas. Walmart’s period of explosive growth coincided with decades of wage stagnation and deindustrialization. By applying relentless downward pressure on prices and wages, the company came to dominte both consumer spending and employment in small towns and rural areas across the middle of the country. The hollowing out of the heartland was good for Walmart’s bottom line: its slogan might have been an amoral maxim attributed to Lenin—“The worse, the better.”