The GOPers have gone mad

A year old quote via the politically orphaned old-school conservative Bruce Bartlett, but so off-the-wall and obviously concocted it serves as a worthwhile reminder of just how crazy - literally crazy and/or profoundly cynical to the point of caring not one whit for this country, not to mention "the truth" - that the GOP has become.  This garbage, from one of actually-existing conservatism's alleged "intellectuals," is analytically sociopathic at best, coming from a former leader of Congress who obviously knows better: 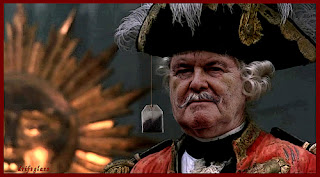 On Nov. 21, Newt Gingrich, who is leading the race for the Republican presidential nomination in some polls, attacked the Congressional Budget Office. In a speech in New Hampshire, Mr. Gingrich said the C.B.O. "is a reactionary socialist institution which does not believe in economic growth, does not believe in innovation and does not believe in data that it has not internally generated."

If the GOP gains even greater power, this country is headed for a cliff. Not the much-touted fiscal cliff, but a "cliff" off of which intellectual integrity and common decency are in freefall and simply no longer part of our political equation. My contempt for grifters like Gingrich - who populate the GOP in large numbers - is boundless.

Email ThisBlogThis!Share to TwitterShare to FacebookShare to Pinterest
Labels: Conservatism in crisis, The Crazy


Romney has lied about Obama raising taxes on the middle class. He’s invented an overseas “apology tour." He’s sworn up and down that the president cut $500 billion from Medicare. He's claims that under Obama, the federal government will control half of all American industry. He's falsely asserted, over and over again, that the president has dismantled Clinton’s welfare work reforms. He’s tried to turn the auto bailout into a case of Obama “bankrupting” the car companies. The list goes on—so long that blogger Steve Benen has assembled no fewer than 917 examples of “Mitt’s mendacity.” And when he's called out, he doubles down. The great mystery, of course, is why—why, running against a fairly unpopular president with a fairly lousy economy in a politically divided country, would the challenger choose to abandon truth in such wholesale fashion? Only Mitt's God, or his shrink, can probably answer that question.