"Obama and the Democrats are fighting to get what the Republicans and the right-wing economic think tanks originally proposed they should do, and the GOP just keeps walking the goalposts to the right"

We are truly screwed. 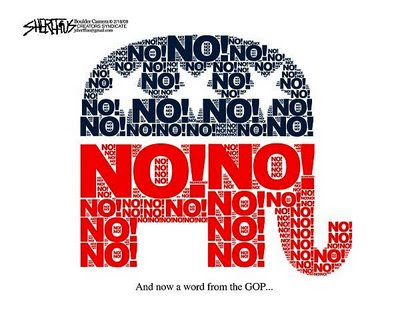 The Democrats are seeking to impose the conservative approach to deficit reduction, while the GOP has chosen to simply take the terrorist route and threaten to blow up the economy unless anti-tax zealot Grover Norquist - to whom the Republicans have literally pledged allegiance as maximal leader in their anti-tax cult - gains victory in his "drown the US government in a bathtub" jihad.

It appears that no one - save perhaps Bernie Sanders - is pushing for a balanced fiscal approach that actually makes economic sense in the context of deep recession and a jobs crisis.

Mike Konczak at "Rortybomb" has this depressing insight into the depths - and rather pathetic ironies -  of the present impasse:

"When taxpayers hear a bank chief complaining, it’s worth keeping in mind that his 10-figure paycheck is largely coming courtesy of us"

Jesse Eisinger, of ProPublica, writing in the NYT's "Dealbook":


The most pronounced development in banking today is that executives have become bolder as their business has gotten worse. 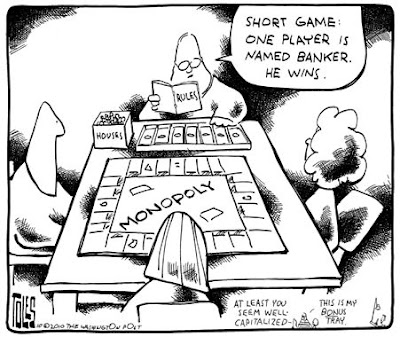 The economy is clearly weaker than expected, and housing prices are falling throughout the land, eroding bank asset values. Yet regulators are on their heels in Washington as bankers and their lobbyists push back against the postcrisis regulations, even publicly condemning the new rules.

In a well-covered exchange, Jamie Dimon, JPMorgan Chase’s chief executive, challenged Ben S. Bernanke, the Federal Reserve chairman, about the costs and benefits of the Dodd-Frank rules. More attention has been paid to the banker’s audacity, but the response of the world’s most powerful banking regulator was more troubling. Mr. Bernanke scraped and bowed in apology without mentioning the staggering costs of the crisis the banks led us into.

So this is a good occasion to step way back to understand just how good the banks have it today.

The federal government, in ways explicit and implicit, profoundly subsidizes and shelters the banking industry. True since the 1930s, it is much more so today. And that makes Mr. Dimon no capitalist colossus astride the Isle of Manhattan, but one of the great welfare queens in America.