"Capital in the Twenty-first Century"


In the stately world of academic presses, it isn’t often that advance orders and 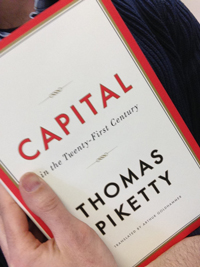 publicity for a book prompt a publisher to push forward its publication date. But that’s what Belknap, an imprint of Harvard University Press, did for “Capital in the Twenty-first Century,” a sweeping account of rising inequality by the French economist Thomas Piketty. Reviewing the French edition of Piketty’s book, which came out last year, Branko Milanovic, a former senior economist at the World Bank, called it “one of the watershed books in economic thinking.” The Economist said that it could change the way we think about the past two centuries of economic history. Certainly, no economics book in recent years has received this sort of attention...

Piketty, who teaches at the Paris School of Economics, has spent nearly two decades studying inequality… The main task he set himself was exploring the hills and valleys of income and wealth, a subject that economics had largely neglected. At first, Piketty concentrated on getting the facts down, rather than interpreting them. Using tax records and other data, he studied how income inequality in France had evolved during the twentieth century, and published his findings in a 2001 book. A 2003 paper that he wrote with Emmanuel Saez, a French-born economist at Berkeley, examined income inequality in the United States between 1913 and 1998. It detailed how the share of U.S. national income taken by households at the top of the income distribution had risen sharply during the early decades of the twentieth century, then fallen back during and after the Second World War, only to soar again in the nineteen-eighties and nineties.