"Inequality is squelching our recovery"

Joseph E. Stiglitz, former Chair of the Council of Economic Advisors and chief economist for the World Bank, @ NYT:

The re-election of President Obama was like a Rorschach test, subject to many interpretations. In this election, each side debated issues that deeply worry me: the long malaise into which the economy seems to be settling, and the growing divide between the 1 percent and the rest - an inequality not only of outcomes but also of opportunity. To me, these problems are two sides of the same coin: with inequality at its highest level since before the Depression, a robust recovery will be difficult in the short term, and the American dream - a good life in exchange for hard work - is slowly dying. 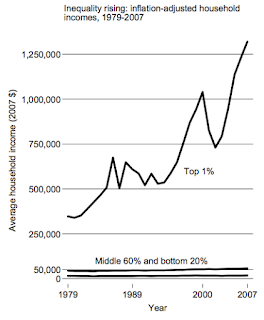 Politicians typically talk about rising inequality and the sluggish recovery as separate phenomena, when they are in fact intertwined. Inequality stifles, restrains and holds back our growth. When even the free-market-oriented magazine The Economist argues - as it did in a special feature in October - that the magnitude and nature of the country's inequality represent a serious threat to America, we should know that something has gone horribly wrong. And yet, after four decades of widening inequality and the greatest economic downturn since the Depression, we haven't done anything about it.

There are four major reasons inequality is squelching our recovery. The most immediate is that our middle class is too weak to support the consumer spending that has historically driven our economic growth. While the top 1 percent of income earners took home 93 percent of the growth in incomes in 2010, the households in the middle - who are most likely to spend their incomes rather than save them and who are, in a sense, the true job creators - have lower household incomes, adjusted for inflation, than they did in 1996. The growth in the decade before the crisis was unsustainable - it was reliant on the bottom 80 percent consuming about 110 percent of their income.