Elizabeth Warren, our "cop on the beat" - and the power of simple, clear rhetoric 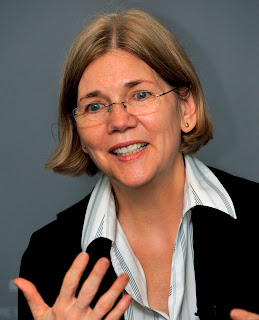 Our new consumer regulatory chief Elizabeth Warren - actually she's setting up the agency and moving on because she'd likely have trouble getting confirmation as the new agency chief through GOP obstructionists - is one of the most effective and broadly popular people in the administration.  So she's being attacked relentlessly by the Wall Street Journal and Beltway neanderthals like Sen. Richard Shelby (R-Bankistan).
As we quoted Paul Krugman the other day the "purpose of the attack on Ms. Warren was to ensure that neither she nor anyone with similar views ends up actually protecting consumers...For people like Ms. Warren — people who warned that we were heading for a debt crisis before it happened — threaten, by their very existence, attempts by conservatives to sustain their antiregulation dogma. Such people must therefore be demonized, using whatever tools are at hand…"

But Elizabeth Warren is no patsy for the people trying to take her down.  Dana Milbank made this clear in a Washington Post article on Professor Warren's grilling by Republicans in Congress: 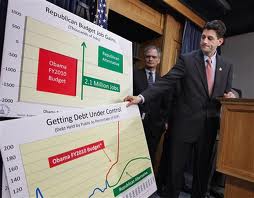 Wisconsin Republican Cong. Paul Ryan makes a lot of noise about deficits.  Of course, his actual record is of voting to increase deficits with tax cuts and big ticket unfunded schemes like...uh...the war in Iraq and Bush 2's prescription drug bill that was deliberately unhinged from any additional revenue source.

Ryan is known for having his staff read Ayn Rand's Atlas Shrugged, a sort of Bible for those obsessed with the notion that taxation - and especially progressive taxation - is inherently evil (literally "morally evil" & I'm not kidding) and that we should essentially eliminate the government.  The GOP congress has chosen Ryan as their Big Gun on the budget, so it's useful to remind folks of just what a fraud this fellow happens to be.  Steve Benen recently had a good background piece on Ryan as the face of the GOP cutback agenda, with lots of additional links if you want to dig deeper into the Ryan deep hole - HERE.
Also, if you missed it, check out our previous posting of Jon Chait's piece on Ryan, HERE.

Posted by Bruce Schmiechen at 3/22/2011 No comments: Links to this post

Winning Progressive - a site dedicated to "sending the message of strong and sensible progressive values to the American public" has launched a serialized version of our "Common Sense" Guide to the Great Deficit Debate & Future of Our Economy.  That's a great idea - giving readers an opportunity to absorb it in "chapters" rather than downloading the whole thing for one sitting.  Thanks to the Winning Progressives for their interest and making the message more accessible and available.  And check out their blog on a regular basis (it's linked at our "Double Espresso" blog-roll) for ongoing coverage of key progressive initiatives. They're doing a great job!
Posted by Bruce Schmiechen at 3/22/2011 No comments: Links to this post

From a recent column by David Leonhardt, business & economics point-man for the NYT:

(T)he people who get paid to make economic predictions say that federal cutbacks would harm the economy this year and next. The research firm Macroeconomic Advisers estimates that the House Republicans' budget would raise the unemployment rate by 0.3 percentage points -- which means about 500,000 lost jobs -- by the end of next year.
Economists on Wall Street, which isn't exactly thrilled with the Obama administration, have made similar forecasts. Nigel Gault, chief United States economist at IHS Global Insight (formerly Wharton Econometric Forecasting), puts it this way: ''I wouldn't be cutting spending over the rest of the fiscal year, because the economy still needs support.''

Boehner's boys in Congress are unhinged from reality. They're pushing a cult of anti-government ideology over cautious, informed policy focused on "growing" jobs and getting the economy back on track.
Posted by Bruce Schmiechen at 3/22/2011 No comments: Links to this post

The Radicalism of Today's Republicans

In today's NYT, William Cronon, a professor of history at University of Wisconsin-Madison, provides some historical perspective on the ideological extremism of today's "conservatives" and the destruction of the Republican Party as a responsible partner in our democracy, a moderating influence or even an authentic bastion of conservative principles:
Wisconsin’s Radical Break
NOW that a Wisconsin judge has temporarily blocked a state law that would strip public employee unions of most collective bargaining rights, it’s worth stepping back to place these events in larger historical context.
Republicans in Wisconsin are seeking to reverse civic traditions that for more than a century have been among the most celebrated achievements not just of their state, but of their own party as well.
Read more »
Posted by Bruce Schmiechen at 3/22/2011 No comments: Links to this post