After the financial crisis, when most of the world's banks were revealed to have been run by reckless gamblers, a couple of institutions stood above the fray.
JP Morgan was one of them. 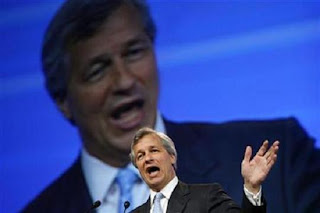 The idiocy of a handful of gamblers should not be construed as a problem with the system as a whole, institutions like JP Morgan said.

Well-run banks should be trusted not to be so colossally reckless and stupid.

And the banking lobbying engine rushed this message to Washington and threw money around. And the lobby quickly persuaded Congress that Wall Street was fine, that the financial crisis was an aberration, that Wall Street should be left alone.
JP Morgan was the prime engine of this message. And its brilliant CEO, Jamie Dimon, was Wall Street's defiant Adult-In-Chief.

Dimon had credibility, because unlike all the other incompetent banks, his bank hadn't imploded and brought the system to the edge of catastrophe...

But now JP Morgan has blown up.

So we finally know the truth about Wall Street, a truth most Wall Street observers have known all along:

Wall Street can't be trusted to manage—or even correctly assess—its own risks. 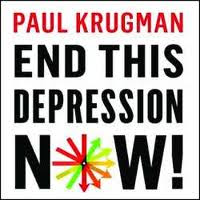 Currently reading Professor Krugman's "End This Depression Now!", from which he's essentially lifted today's column in the NYTs.  A Must Read!  Krugman's also been batting down - without mentioning names - some of the nonsense that's being peddled by his "colleague" David Brooks about structural problems trumping any effective solutions to the current crisis.

Money quote today is Krugman quoting Keynes - "Economists set themselves too easy, too useless a task if in tempestuous seasons they can only tell us that when the storm is long past the sea is flat again":

A few days ago, I read an authoritative-sounding paper in The American Economic Review, one of the leading journals in the field, arguing at length that the nation’s high unemployment rate had deep structural roots and wasn’t amenable to any quick solution. The author’s diagnosis was that the U.S. economy just wasn’t flexible enough to cope with rapid technological change. The paper was especially critical of programs like unemployment insurance, which it argued actually hurt workers because they reduced the incentive to adjust.

O.K., there’s something I didn’t tell you: The paper in question was published in June 1939. Just a few months later, World War II broke out, and the United States — though not yet at war itself — began a large military buildup, finally providing fiscal stimulus on a scale commensurate with the depth of the slump. And, in the two years after that article about the impossibility of rapid job creation was published, U.S. nonfarm employment rose 20 percent — the equivalent of creating 26 million jobs today.

So now we’re in another depression, not as bad as the last one, but bad enough. And, once again, authoritative-sounding figures insist that our problems are “structural,” that they can’t be fixed quickly. We must focus on the long run, such people say, believing that they are being responsible. But the reality is that they’re being deeply irresponsible.