GOP insanity - our ace in the hole?

Another view on the debt ceiling battle from Ezra Klein:

I knew the White House wanted a compromise on the debt ceiling. I just didn't expect them to do quite so much, well, compromising. 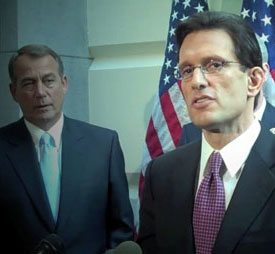 Here's what appears to have been in the $4 trillion deal they offered the Republicans: A two-year increase in the Medicare eligibility age. Chained-CPI, which amounts to a $200 billion cut to Social Security benefits. A tax-reform component that would raise $800 billion and preempt the expiration of the Bush tax cuts -- which would mean, for those following along at home, that the deal would only include half as much revenue as the fiscal commission recommended, and when you add the effect of making the Bush tax cuts a permanent part of the code, would net out to a tax cut of more than $3 trillion when compared to current law.

That last bit apparently killed the deal. It But it was actually the biggest concession on the table.

Is Obama Besting Boehner in the Budget Battle?

House Majority Leader John Boehner turned down President Obama’s offer to “go big” on the budget deal – a $4 trillion budget reduction was offered Saturday night in exchange for a rise in the debt ceiling.  I, along with many progressives, was furious with the president for even saying he would put Social Security, Medicare and Medicaid on the negotiating table.  However, upon closer examination of his words, I realized that the president was referring, for example, to savings due to improving Medicare efficiencies and rationalizing health care spending through an Independent Patient Advisory Board, as discussed in a previous Winning Progressive column, rather than making cuts to entitlement benefits.

I now realize Obama knew the GOP would never say “Yes” to a deal that included $1 trillion in removing tax loopholes for corporations and the wealthy, even if it were sweetened with $3 trillion in budget cuts to entitlement programs and some defense expenses. That’s because Boehner’s buddies in the House are bound to a cause higher than their party or their constitutional duty: 235 House Republicans have signed Grover Norquist’s “No Taxes” pledge.  Signees must oppose any new taxes or new tax revenue, or suffer the wrath of Norquist and his group “Americans for Tax Reform”, which would mean a sure political death in today’s conservatives-only GOP.

President Obama has reaped a huge political gain by appearing to go out of his way to maintain the fiscal solvency of the federal government, and the Republicans look like the bad guys again.