Is the most popular person in Washington also the most hated?

James Surowiecki, at The New Yorker, on Elizabeth Warren: 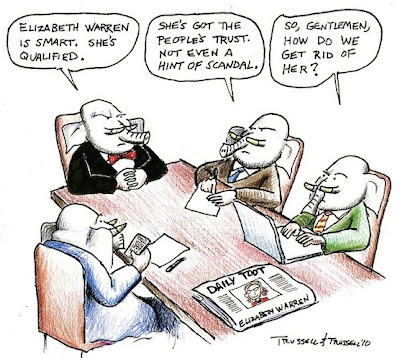 Elizabeth Warren may well be the most popular person in Washington.

When she was head of the Congressional Oversight Panel on TARP, her willingness to go after Wall Street, the Treasury Department, and the Fed made her a liberal icon. And her folksy, Midwestern air and her ability to express complex financial issues in simple language turned her into an unlikely media superstar.

Warren is now working to set up the Consumer Financial Protection Bureau, a new government agency inspired by her own work on consumer credit, and in the past couple of weeks almost a quarter of a million people have signed an online petition asking President Obama to nominate her as the official boss of the agency.

Yet Warren may also be the most hated person in Washington.

"Lapsed Republican" Bruce Bartlett, commenting to the Washington Post on the power of the extremist  right-wing anti-tax "enforcer," Grover Norquist, who has extracted a pledge never to raise taxes from  all but 13 of the 288 GOP elected reprsentatives in DC:


(E)ven though tax increases may be justified economically, they are never justified politically if you’re a Republican...it’s been Republican dogma that deficits don’t matter and the only thing that matters for the economy is cutting taxes.

Posted by Bruce Schmiechen at 6/06/2011 No comments: Links to this post

Email ThisBlogThis!Share to TwitterShare to FacebookShare to Pinterest
Labels: "Starve the Beast", Conservatism in crisis, Taxes

"Winning the Future" - A slogan or an agenda?

Noting the dismal jobs picture that just came out - a 54,000 net jobs gain  in May when we need at least five times that each month just to keep the hole from getting deeper - Robert Kuttner at American Prospect sounds the alarm and offers a strategy. According to Kuttner, with the economy still sputtering and no end in sight, a massive infrastructure investment program is the surest path out of the Great Recession:


(W)hat the economy needs to fully recover is a massive -- and I mean massive -- infrastructure and jobs program financed by surtaxes on wealthy individuals and on windfall financial-sector profits, including taxes on profits from short-term financial trades. We could also get upwards of $200 billion a year from tax enforcement, mainly on trans-national evasion used by America's wealthiest. Some of the funds for this program could also come from winding down the gratuitous wars we're currently engaged in. And some could even come from a modest increase in short-term deficits.

The order of magnitude of the public investment program should be at least half a trillion dollars a year, for at least five years, and more if that doesn't solve the problem. We would not hesitate to spend this kind of money and levy surtaxes if America found itself in a serious war. It was the economic side-effects of the massive WWII program of tax, borrow, and invest that finally pulled America out of the Great Depression -- and powered the postwar boom. 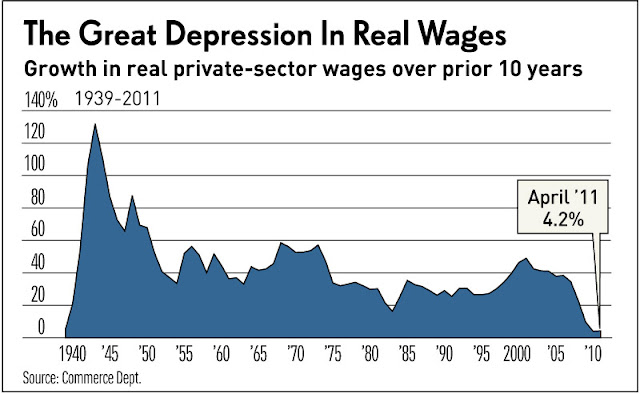 The increase in total private-sector wages, adjusted for inflation, from the start of 2001 has fallen far short of any 10-year period since World War II, according to Commerce Department data. In fact, if the data are to be believed, economywide wage gains have even lagged those in the decade of the Great Depression (adjusted for deflation).