... (T)he current budget deficit is overwhelmingly the result of the depressed economy, and it’s not clear that we have a structural budget problem at all, let alone the fundamental mismatch between what we want and what we’re willing to pay for that people like to claim exists. Here’s another chart, showing the primary federal balance — that is, not counting interest payments — since 1972 (data from CBO): 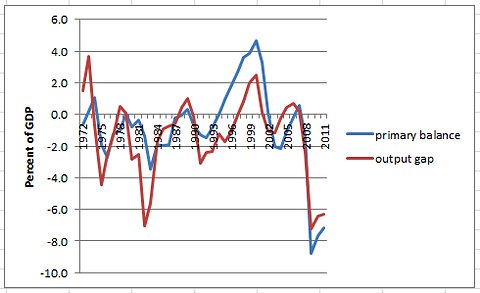 It’s hard to look at that chart and not conclude that the slump is the principal cause of the deficit. (Evan) Soltas suggests, based on a more careful statistical analysis, that the structural budget deficit, including interest, is 2 percent of GDP or less. He also makes an interesting observation: the deficit has become more cyclically sensitive over time thanks to rising inequality. How so? More revenue comes from the wealthy — even though their tax rates have fallen — and their income is more volatile than that of ordinary workers.

So, the whole deficit panic is fundamentally misplaced. And it’s especially galling if you look at what many of the same people now opining about the evils of deficits said back when we had a surplus. Remember, George W. Bush campaigned on the basis that the surplus of the late Clinton years meant that we needed to cut taxes — and Alan Greenspan provided crucial support, telling Congress that the biggest danger we faced was that we might pay off our debt too fast. Now Greenspan is helping groups like Fix the Debt.

And as Duncan Black points out, the Bush experience tells us something important about fiscal policy: namely, that when Democrats get obsessed with deficit reduction, all they do is provide a pot of money that Republicans will squander on more tax breaks for the wealthy as soon as they get a chance. Suppose Romney had won; do you have even a bit of doubt that all the supposed deficit hawks of the GOP would suddenly have discovered that unfunded tax cuts and military spending are perfectly fine?

The point is that the whole focus of budget discussion is based on a combination of bad economics and bad (and fundamentally dishonest) politics. We’re looking not so much at a Grand Bargain as at a Great Scam.

More HERE from Joe Weisenthal @ Business Insider on the fact that the path to deficit reduction isn't imposing austerity "pain" but addressing unemployment. Excellent article with lots of data, worth reading in full.