In the likely event of a "shutdown of the government," John  Boehner, Paul Ryan, Eric Cantor, et. al. - who have refused to compromise even with their own opening offer of $33 billion in spending cuts to avert a crisis - will continue to get their paychecks.

While the troops in Iraq and Afghanistan may not.

Senate Democrats have passed a bill to impose  "shared sacrifice," denying Congress and the President pay if there is a shutdown,  but so far the GOP-majority House are deferring to their preferred notion of "trickle-down sacrifice" and will keep their own money coming.

(Troops link via commenter "Seth" at Ta-Nehisi Coates/Atlantic.)
Posted by Bruce Schmiechen at 4/08/2011 2 comments: Links to this post

Self-proclaimed fiscal conservative and blogger extraordinaire, Andrew Sullivan, has been praising Paul Ryan and the budget proposal he's hatched for the GOP - and he's been taking a lot of well-deserved flak for embracing an agenda that Paul Krugman has correctly identified as "ludicrous and cruel" (HERE in an excellent fact-based column.)
E.D. Kain, writing at Forbes quotes one of Sullivan's readers in response: 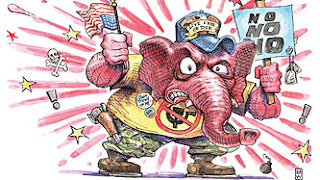 [Ryan’s budget] is the culmination of about a thirty year Republican strategy called "starve the beast," by which Republicans have worked to reduce taxes and increase the national deficit as large as possible -  all to create the supposed "deficit crisis" that we now face and to use that crisis to eliminate programs like Medicare, Medicaid, Social Security and a slew of other programs (EPA, SEC, Planned Parenthood, collective bargaining, etc.) that the Republican class has never been able to eliminate through the democratic process.  This "starve the beast" Republican strategy has been openly acknowledged for years and I know you are well aware of it.  And the Ryan "budget plan" is transparently an attempt to cash in on this long-standing political agenda.

Interestingly, also at Forbes, last year the conservative commentator Conor Friedersdorf clearly offered an analysis that should be obvious to anyone like Sullivan who touts "fiscal conservatism" as a guiding principle. In short, "Starve the Beast" proponents - the kind of reckless "conservatives" like Paul Ryan, who voted for the Bush tax cuts and wants  even bigger breaks for high earners - are themselves responsible for the growth in debt and the ensuing obligations on average taxpayers to sustain fiscal balance over the long run, a prospect which no sane person believes can be done without increases in progressive taxation. Fiedersdorf "headlined" his piece forthrightly - "How 'Starve the Beast' Made the Taxpayer Poorer."
Read more »
Posted by Bruce Schmiechen at 4/08/2011 No comments: Links to this post