"Fixing What's Wrong With Our Economy"

The AFL-CIO's perspective on what's gone wrong and what we can do about it :

The economic policies that led to the financial crash of 2008 and the subsequent Great Recession should have been permanently discredited by their epic failure. Instead, the Republican presidential candidates are now resurrecting the same failed policies and pretending the crash never happened. 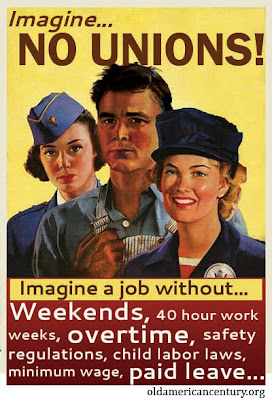 America cannot afford to go down this path again. If we want to fix what is wrong with our economy, we have to learn from our mistakes and avoid repeating them.

The crash of 2008 and the Great Recession were inevitable consequences of three decades of economic policies designed by and for Wall Street and the wealthiest Americans. At the heart of the problem was the hollowing out of American manufacturing, the growing dysfunction of our financial sector and a rapid increase in economic inequality, all of which crippled the growth engine of the U.S. economy.
Starting in the 1980s, corporate America decided to boost profits by shipping U.S. jobs overseas.

NAFTA and the admission of China into the World Trade Organization (WTO) accelerated the drive to relocate production to “export platforms” in foreign countries that would ship goods back to the U.S. market. Corporations that sent jobs overseas became forceful proponents of a “strong” (overvalued) dollar, which enhanced the profitability of their overseas operations but at the same time made much of the U.S. manufacturing sector uncompetitive and led to perennial U.S. trade deficits.

Also by the 1980s, the U.S. financial sector was failing to perform its essential function of channeling savings to productive investment in the real economy. Financial firms on Wall Street focused instead on making a quick buck by stripping assets from existing businesses and downsizing their workforces, and on various forms of complex financial engineering that had little economic value. Financial firms also provided critical support for a “strong dollar” policy that diverted productive investment away from the U.S. manufacturing sector toward overseas operations.  By the eve of the crash of 2008, the manufacturing sector had shrunk to half its 1960 size, while the financial sector had doubled in size and accounted for 40 percent of corporate profits.

The deindustrialization of America and the substitution of speculation for productive investment were not accidents, they were not inevitable, and they were not the outcome of natural forces.  They were the predictable results of mistaken policy choices made by politicians of both parties for more than a generation.  These policy choices had victims with first and last names: millions of displaced workers, shuttered factories and hollowed-out communities across the country hobbled by shrinking tax bases that no longer could support vital public services.