Posted by Bruce Schmiechen at 8/01/2011 No comments: Links to this post

"Lousy Negotiating Skills Are Not the (Main?) Problem" 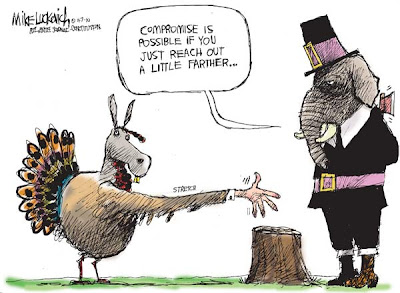 
America wakes up this morning with the specter of a self-inflicted national default behind us, at least until 2013, according to the deal announced last night.

That is unequivocally a good thing for our economy not to mention our national sanity.  It’s a good thing in the same way that ceasing to bang yourself on the head with a hammer would be a good thing.

But really, what the h-e-double-hockey-sticks (sorry, I’ve got young kids) was that about??!!

If your conclusion is that Democrats got rolled because the President is a lousy negotiator, I disagree.

Not on his negotiating skills…as someone said in comments, I wouldn’t want him in the auto showroom with me when I’m bargaining for a better price.  I disagree that better negotiating skills would have made a big difference.  The problem goes much deeper.

The best of all possible worlds in the wake of "The Deal" ? 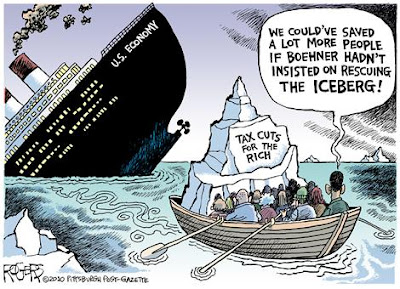 Jon Chait at The New Republic speculates that this debt ceiling brouhaha and the GOP's penchant for all-or-nothing "negotiating" might have a much more optimal result than anyone currently is willing to even discuss:


If Obama wins reelection, he can refuse to extend any tax cuts on income over $250,000. That will prompt Republicans to refuse to extend tax cuts on any income under $250,000 (as they signaled last December, and in keeping with their longstanding priorities, which deem the middle class tax cuts mere sweetener to get the tax cuts for the rich they really want.) Then the tax cuts expire while Obama blames Republicans for holding the (popular) universal tax cuts hostage to the (unpopular) tax cuts that only benefit the rich.

Assuming the economy has limped into some sort of recovery track by 2013, allowing an automatic default to Clinton-era tax rates would be the simplest path in returning to sane fiscal policy.
Posted by Bruce Schmiechen at 8/01/2011 No comments: Links to this post 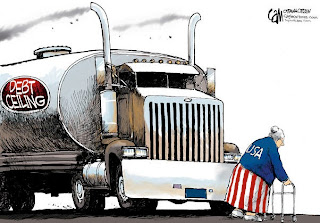 A Wall Street heavy reacts, via The New York Times:


Last week brought the disconcerting news that the economy grew no faster than the population during the first six months of the year, in part because of spending cuts by state and local governments. Now the federal government is cutting, too.

He added, “We have a very weak economy, so withdrawing more spending at this stage will make it even weaker.”


Paul Krugman, one of the President's severest critics in the debt-ceiling negotiations from the liberal end of the spectrum :


What Republicans have just gotten away with calls our whole system of government into question. After all, how can American democracy work if whichever party is most prepared to be ruthless, to threaten the nation’s economic security, gets to dictate policy? And the answer is, maybe it can’t.

Posted by Bruce Schmiechen at 8/01/2011 No comments: Links to this post