The debt ceiling impasse - will the GOPer crazies go along with McConnell's handing off to Obama? 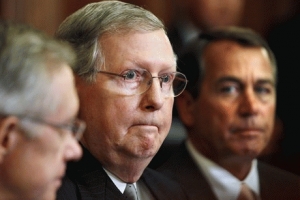 Is the GOP's Senate leader capitulating on the debt ceiling, salvaging nothing out of the negotiatons but some weak version of "face"?  Explanations and analysis of Mitch McConnell's somewhat arcane proposal to take an elaborate dive - while wagging a finger at the President - from Talking Points Memo HERE and Ezra "Wonkbook" Klein HERE.  If this thing flies, it looks like President Obama's game of high-stakes chicken with his adversaries has succeeded. Or not, in the less sanquine view of Salon's Andrew Leonard, HERE. We'll see how this scheme plays out very soon.
Posted by Bruce Schmiechen at 7/13/2011 1 comment: 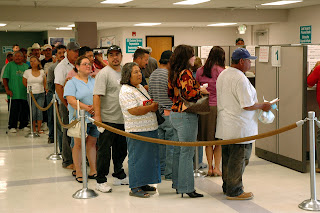 More bad news on the job market front: the number of jobless workers per job opening stayed flat at 4.7 in May, according to a new report from the Labor Department. That is more than twice the average ratio seen during the boom years that preceded the Great Recession.

Next, addressing the apparent lack of urgency over the desperation of these job-seekers, Nancy Folbre, an economist at the University of Massachusetts-Amherst, wonders why there is so little sense of crisis coming from the Beltway:


High unemployment has become the new normal. Two years after the official end of the recession, the monthly refrain of poor jobs reports showing an unemployment rate stalled at about 9 percent does little to increase any sense of political urgency.