What's The Matter With Red States? The "Entitlement" Hustle 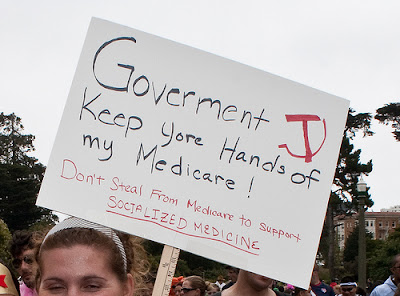 Paul Krugman at NYTimes describes the almost absurd predicament of much of "red state" America. They're hooked on so-called "entitlements" while the GOP's  "severe conservative" pols are angrily pointing their fingers at some imagined class of moochers who are bleeding the government dry, immersed in a "culture of dependency."

(What Krugman doesn't mention is that there's often a racial sub-text to the opportunistic political rhetoric, which explains the willful blindness and hypocrisy that drives this version of anti-government white populism within the GOP.)  Krugman:


Rick Santorum declares that President Obama is getting America hooked on “the narcotic of dependency.” Mr. Romney warns that government programs “foster passivity and sloth.” Representative Paul Ryan ... requires that staffers read Ayn Rand’s “Atlas Shrugged,” in which heroic capitalists struggle against the “moochers” trying to steal their totally deserved wealth, a struggle the heroes win by withdrawing their productive effort and giving interminable speeches.

Many readers of The Times were, therefore, surprised to learn, from an excellent article published last weekend, that the regions of America most hooked on Mr. Santorum’s narcotic — the regions in which government programs account for the largest share of personal income — are precisely the regions electing those severe conservatives. Wasn’t Red America supposed to be the land of traditional values, where people don’t eat Thai food and don’t rely on handouts? ...