"This is why the United States is doomed" 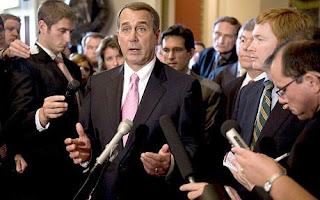 House Republicans pinned the blame for Friday's disappointing jobs report squarely on the White House, saying the Obama administration's "over-taxing, over-regulating and over-spending" has stifled economic growth.
"One look at the jobs report should be enough to show the White House it's time to get serious about cutting spending and dealing with our ailing economy," Speaker John Boehner (R-Ohio) said.


How many blatant untruths can a Republican speaker of the House stuff into one sentence? Quite a few!

"When I use a word," Humpty Dumpty said in rather a scornful tone, "it means just what I choose it to mean -- neither more nor less." 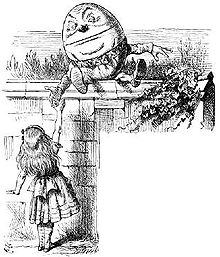 The battle over whether it’s true that the Republican plan (to replace single-payer medical insurance for seniors with capped vouchers in the private market) would “end Medicare” is about to play out in a critical way in New Hampshire.

The National Republican Congressional Committee, which oversees House races for the GOP, has written a sharply-worded letter demanding that a New Hampshire TV station yank an ad making that claim.

Whether the ad gets taken down could help set a precedent for whether other stations will air Dem TV ads making this argument, which is expected to be a central message for Dems in the 2012 elections.


When We Replace The Marines With A Pizza, We Will Call The Pizza The Marines.

Posted by Bruce Schmiechen at 6/04/2011 No comments: Links to this post

On the GOPers who claim "We didn't create this mess!" 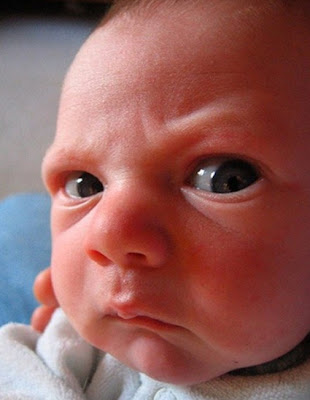 Titanic noted the GOP congressman who told Tres. Secy. Geithner "We didn't create this mess!" during the recent White House meeting over raising the debt ceiling.  James Kwak at Baseline Scenario has this reaction:


The frightening thing is, he probably believes it. When people hold certain ideological beliefs strongly enough, no amount of facts will get in their way. If you believe that the current deficit is the result of excessive government spending (passed by Democrats, even though they only controlled Congress and the White House for four out of the past thirty years*), no pile of charts will be big enough to convince you otherwise — just like if you believe that tax cuts increase tax revenues, that the deficit has produced high interest rates, or that Barack Obama was born on Mars, no amount of evidence will convince you otherwise.

This is just fine if you are my daughter, who is four years old — although, actually, she admits it when she makes a mess (and helps clean it up). But if you are a legislator in the most powerful country in the world –and the one whose debt is the definitionally risk-free asset against which the yield of every other financial asset in the entire world is measured — it’s not good enough.

Posted by Bruce Schmiechen at 6/04/2011 No comments: Links to this post