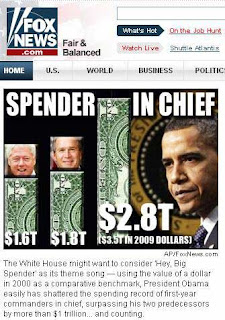 Paul Krugman debunks "the claim that Obama has presided over a vast expansion of government — a claim backed not by describing any specific programs, but by pointing to the share of federal spending in GDP."  As Krugman shows, an alleged huge growth of government spending under Obama is nothing more than the inevitable result of a serious, lingering depressed economy in which increasing numbers of citizens are forced into safety-net programs and GDP growth has plummeted:

Well, part of the answer is that the ratio is up because the denominator is down. According to CBO estimates, in fiscal 2010 the economy operated about 7 percent below potential. This means that even if what the government was doing hadn’t changed, the federal spending share of GDP would have risen by 1.4 percentage points.

Then, look inside the budget data (pdf), specifically at Table E-10. You’ll see a surge in spending on “income security”; that’s basically unemployment insurance, food stamps, and similar items. In other words, spending on safety-net programs is up because the economy is depressed, and more people are falling into the safety net.