Although it was quickly overshadowed by his choice of Representative Paul D. Ryan of Wisconsin as his running mate, Mitt Romney released an important document last week by his principal economic advisers that deserves more attention than it got. It is an audacious attempt to blame Barack Obama for the economic mistakes of George W. Bush and Republicans in Congress.


President Obama in Dubuque, Iowa, returning fire on Medicare in the wake of the Romney-Ryan campaign's new "Mediscare" attack ad:

"I think they know their plan is not very popular," the president said. "You can tell that because they're being pretty dishonest about my plan."

"Here's what you need to know," the president continued. "I have made reforms that have saved millions of seniors with Medicare hundreds of dollars on their prescription drugs." Obama was referencing the fact that Obamacare closed the donut hole, which Romney and Ryan would reinstate. "I have proposed reforms that will save Medicare money by getting rid of wasteful spending in the system. Reforms that will not touch your Medicare benefits, not by a dime." 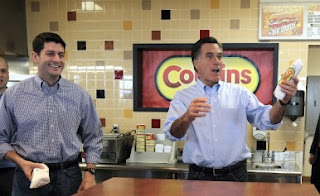 As for Romney and Ryan? "They have a very different plan," the president said. "They want to turn Medicare into a voucher program." That would end the guarantee of Medicare, Obama said, citing the CBO study showing that the Ryan plan would cost seniors an extra $6,400 per year.

"My plan has already extended Medicare by a decade. Their plan ends Medicare as we know it. My plan reduces the cost of Medicare by cracking down fraud, and waste, and subsidies to insurance companies. Their plan makes seniors pay more so they can give another tax cut to millionaires and billionaires. That's the difference between our plans on Medicare, that's an example of the choice in this election.."