More on Charles Murray's "Coming Apart: The State of White America, 1960-2010" from the New York Times review by Nicholas Confessore:


One of its overriding themes is that economic insecurity doesn’t have much to do with eroding civic values, so we shouldn’t bother using government to tackle inequality. You will learn about working-class laziness, but you will find little discussion of the decline of trade unions or the rise of a service economy built on part-time work without benefits.

Murray dismisses research by scholars who have found that people in bankruptcy court usually end up there because they lost a job, got divorced or faced catastrophic medical bills, pointing to a contrary study of a single year’s worth of bankruptcy filings in Delaware, home to many of America’s credit card companies but very few of its citizens.


Though a self-described libertarian, Murray is not immune to the rage of the 99 percent. He lashes into bloated C.E.O. pay, but chiefly as a symptom of collapsing codes of behavior and propriety. And he is also skeptical that working-class whites are employed less because they can’t find decent jobs. How can the economy have anything to do with it, he asks, when the decades in question have included periods of rapid economic growth?
Perhaps because not everyone has shared in that growth. While Murray’s new upper class was taking home an ever greater share of national wealth, incomes for almost everyone else were stagnating. During the decade preceding the 2008 bust, according to the Census Bureau, median family income in the United States dropped from $61,000 a year to $60,500.
Indeed, in comparison with the early 1960s, American workers today are less likely to have pensions, less likely to be able to support a family on a single income and, until the much-reviled ObamaCare law kicks in, less likely to be able to afford health insurance if their employer doesn’t provide it.
Working-class whites are different from the cognitive elite in at least one way: They have less money. 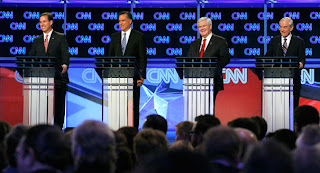 Paul Krugman, at the New York Times, on the state of contemporary conservatism: "tinfoil hats have become a common, if not mandatory, G.O.P. fashion accessory."  Read the rest HERE.