The Sequester's Impact on Recession and Recovery 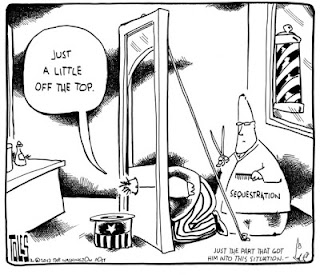 The New Republic asked a range of economists whether the sequester will throw us back into recession. Here are some answers:


With $85 billion in budget cuts set to take effect Friday, when the sequester kicks in, there's been plenty of debate about whether the economy will spiral back into a recession. In search of some clarity, The New Republic asked economists from across the political spectrum a simple question, "Will the sequester start another recession?"...

It could. And either way, it's dumb policy.
"My reaction is possibly, but improbably. That said, it's pushing policy in exactly the wrong direction. At a time when the economy still needs a stimulus to promote recovery rather than restrictive policies to prevent overheating. I think job one economically today is to restore full employment, that is today's problem. Tomorrow's problem will be to deal with long term budget imbalances, but trying to curb long term budget imbalances now carries the high probability of delaying economic recovery and the possibility of turning recovery into decline and, were that to happen, it would be a major misfortune for the nation." — Henry Aaron, senior fellow of economic studies at the Brookings Institution

Probably not. But we'll notice a difference.
"In my view it will have a noticeable hit on the growth rate of between 0.5 and 0.9 percentage points. That won't put us in a recession but it will definitely slow improvements to unemployment and the job market." — Austan Goolsbee, professor of economics at the University of Chicago and former chairman of the Council of Economic Advisers

It's certainly not good for the economy.
"It's not helpful. However, trading the sequester for long-term Social Security and Medicaid/Medicare benefit cuts would be worse. Short-term cuts are fairly easy to reverse if it's done quickly." — James Galbraith, economist, University of Texas at Austin