Ezra Klein at Wonkbook, clarifies the agenda underlying much of the fiscal debate, pointing out that under the revenue/spending scenario deemed by current law - with the Bush tax cuts due to expire unless revived by new legislation - "We'll only have giant deficits if Congress wants giant deficits": 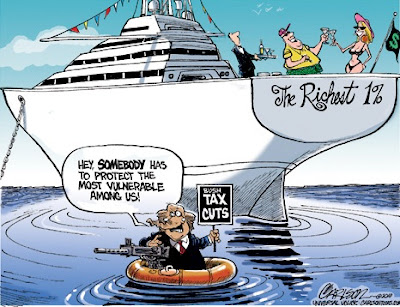 If Congress lets the Bush tax cuts expire or offsets their extension, implements the Affordable Care Act as scheduled and makes or offset the Medicare cuts prescribed by the 1997 Balanced Budget Act — which (the Congressional Budget Office) calls the “extended baseline scenario” — the national debt will be totally manageable.

If Congress passes laws extending the Bush tax cuts without offsetting the cost, repealing the Affordable Care Act and its cost controls and protecting doctors from Medicare cuts without making up the savings elsewhere — the “alternative fiscal scenario” — the national debt will be totally out of control: