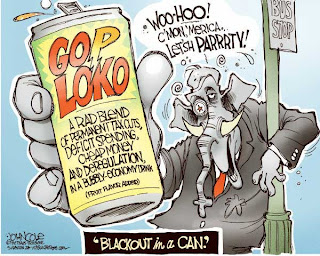 (T)he Republican Party may no longer be a normal party...it has been infected by a faction that is more of a psychological protest than a practical, governing alternative. The members of this movement do not accept the logic of compromise...

The members of this movement do not accept the legitimacy of scholars and intellectual authorities...

The members of this movement have no sense of moral decency...

The members of this movement have no economic theory worthy of the name....

The struggles of the next few weeks are about...an odd protest movement that has separated itself from normal governance, the normal rules of evidence and the ancient habits of our nation.

Oh wait a minute.  That's not Prof. Krugman - it's that other Times columnist David Brooks, musing on the incoherence of GOP Mad Hatters, fearful of chickens that have come home to roost on his carefully trimmed front lawn, smelling the noxious stuff that has hit his "conservative" fan, chafing at the inmates taking over his asylum and obviously angered at long-ago losing any shot at gaining the driver's seat in the GOP Clown Car.
Posted by Bruce Schmiechen at 7/05/2011 1 comment: Links to this post

Email ThisBlogThis!Share to TwitterShare to FacebookShare to Pinterest
Labels: Conservatism in crisis

"A lie gets halfway around the world before the truth has a chance to get its pants on." - Winston Churchill

Apparently via George Will's cherry-picking a new book on the finanical crisis, the "Fannie Mae and Freddie Mac (and Community Reinvestment Act and Democrats) caused the financial crisis" fairy tale is finding new currency.  Pushing this phony narrative is of utmost importance for the right because it puts government rather than Wall Street at the center of the ugly story that's caused the country so much pain. 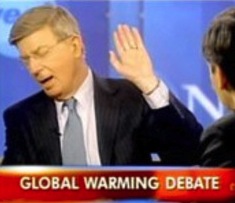 We went through this fraudulent "history" at the rarified levels of polite parlor conservatism already with David Brooks parroting the nonsense that generally emanates from crazy old Know-Nothings with tea bags taped to funny hats.

Now it's George Will, whose words will be echoed "halfway around the world" in certain ideological and intellectually vulnerable circles before they are countered. Certainly Will's pronouncements have more cachet than a guy holding a hand-lettered sign at a Michele Bachmann rally or  the ravings of one of the usual suspects on FOX News. Will's voluminous commentaries are larded with the Ivy League erudition of 19th Century historical references and lots of Winston Churchill quotes.

Will once wrote "A politician's words reveal less about what he thinks about his subject than what he thinks about his audience." Apparently - given Will's willfull misrepresentations, aka Big Lies, regarding Fannie, Freddie and the CRA - this applies to pundits as well. George Will thinks his readers are as ignorant and eager to swallow fabrications based on his long-standing ideological resentments as the Tea Partiers he echoes.

We'll let Dean Baker at Council for Economic and Policy Research do the necessary debunking:


It really is incredible to see such a concerted effort to rewrite history in front of our faces. There is not much ambiguity in the story of the housing bubble. The private financial sector went nuts. They made a fortune issuing bad and often fraudulent loans which they could quickly resell in the secondary market. The big actors in the junk market were the private issuers like Goldman Sachs, Citigroup, and Lehman Brothers. However, George Will and Co. are determined to blame this disaster on government "compassion" for low-income families.