Calculating the costs of the Bush tax cuts...

Just for the top 5% of incomes:

(Source: National Priorities Project)
via Wonkblog
Posted by Bruce Schmiechen at 10/15/2011 No comments:

An excellent editorial in the New York Times on the disastrous British austerity strategy - which, as the authors point out, is an ideology more than a viable economic plan:


For a year now, Britain’s economy has been stuck in a vicious cycle of low growth, high unemployment and fiscal austerity. But unlike Greece, which has been forced into induced recession by misguided European Union creditors, Britain has inflicted this harmful quack cure on itself.

Austerity was a deliberate ideological choice by Prime Minister David Cameron’s ruling coalition of Conservatives and Liberal Democrats, elected 17 months ago. It has failed and can be expected to keep failing. But neither party is yet prepared to acknowledge that reality and change course. 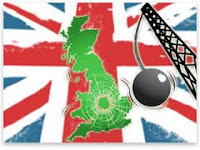