"The Sickness Beneath the Slump"

Economist Robert Shiller of Yale offers some thoughts - and data - on the roots of the financial crisis, the long-term effects on consumer spending, "rational market expectations" and a major failure of his profession in recent decades: 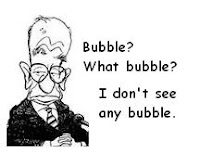 THE origins of the current economic crisis can be traced to a particular kind of social epidemic: a speculative bubble that generated pervasive optimism and complacency. That epidemic has run its course. But we are now living with the malaise it caused.

News accounts of the economic crisis rarely put it in these terms. They tend to focus on distinct short-term developments or on the roles of prominent people like Federal Reserve governors, members of Congress or Wall Street financiers. These stories grab attention and may be supported by some of the economic statistics that the government and private institutions collect.

But the economic situation is primarily driven by hard-to-quantify sociological factors that play out over many years.

The uptick in the unemployment rate, to 9.1 percent from 8.8 percent two months earlier and the drop in stock prices over the last month have attracted notice, yet in a sense they are symptoms of a deeper economic sickness.

Email ThisBlogThis!Share to TwitterShare to FacebookShare to Pinterest
Labels: Financial crisis, The Econocracy

One of the more desperate candidates for the GOP's presidential nomination, former Minnesota Governor Tim Pawlenty, has doubled down on the party's Tax Cuts Uber Alles dogma and equated his crank faith-based economic strategy with belief in America. 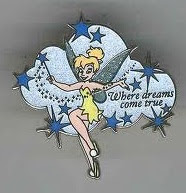 Pawlenty’s $11.6 trillion tax-cut plan, which reduces rates on income, capital gains, interest, estates and dividends, is almost three times larger than the proposals endorsed by House Republicans...Almost half of the benefits would flow to taxpayers in the top 1 percent of income distribution, or those earning more than $593,011 in 2013... 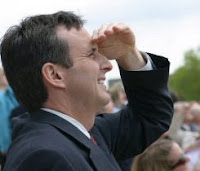 Pawlenty...said 5 percent annual average economic growth would help make up the revenue gap... (S)uch growth would be driven by the tax plan as well as by spending cuts, regulatory overhaul and monetary policy changes that Pawlenty is proposing.

So we're getting a version of the "tax cuts pay for themselves" mantra on steroids.  Paul Krugman, NYT's columnist and Nobel Prize-winning economist at Princeton, looks at Pawlenty's "plan" and the promise - 5% economic growth driven by massive reductions in taxes:


Tim Pawlenty — who has turned out to be a much bigger fool than I or, I think, anyone imagined — replies to criticism of his claim that he can get 10 years of GDP growth at 5 percent:


Obama’s economic team doesn’t have a plan, so their spokespeople attack ours. The idea that they don’t believe in the American people enough to say that we can grow the economy at 5% GDP really says everything. You have to wonder if in fact Obama’s grand plan is that we don’t grow at all — and if so — he and the central planners are doing a great job of that. 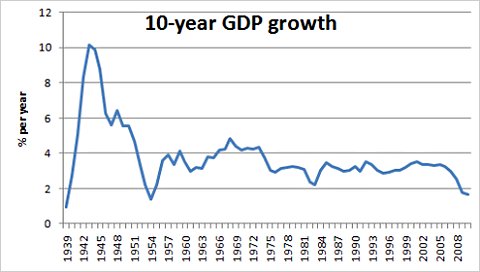 Bureau of Economic Analysis Data here.
Except for the big jump from the depths of the Great Depression to the height of World War II, we have never had a decade of growth at 5%.

What’s also notable in this figure is the invisibility of all the supposed economic miracles we hear about. Saint Reagan was supposed to have revitalized the economy; can’t see it here. All you can really see is that the 60s were very good, and the recent slump has been very, very bad.

At least we can thank Pawlenty for erasing any doubts that he's one of the biggest fools out there - even by GOP presidential aspirant standards (or lack of them.)

Posted by Bruce Schmiechen at 6/11/2011 No comments: Links to this post