I was impressed with the speech and appreciated the fact that the package was about 50% larger than had been anticipated in early reports.  The proposal falls short of the ideal, i.e. what is needed to recover quickly from the unemployment crisis - but the President was clearly trying to put a concrete legislative challenge to Congress on the table that would be realistic if a significant segment of the Beltway GOP was serious about anything other than sinking his chances for re-election.  He was asking his opposition to put country before petty politics.  Bitter experience, of course, suggests that they won't.

The speech was a substantive appeal to reason that could persuade moderate and/or confused voters that Obama is serious and his opposition is not, as well as offering the Democratic base some plausible agenda around which they can rally. The tone was passionate and convincing.  It represents a turning point, both for uniting Democrats and setting a marker for the coming campaign.

"Taking the temperature" among restive Democrats, here's one early reaction from economist Mark Thoma, who has been an outspoken liberal critic of the President on these issues: "(T)he speech was bolder than expected, showed political savvy (though it will still face stiff resistance), and there appears to be a commitment to keep pushing new legislation until the unemployment problem is eased."
Posted by Bruce Schmiechen at 9/08/2011 2 comments: 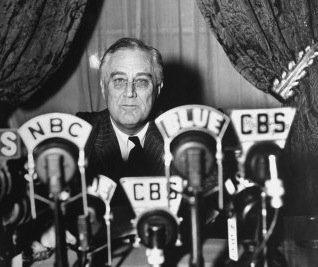 No country, however rich, can afford the waste of its human resources.  Demoralization caused by vast unemployment is our greatest extravagance.  Morally, it is the greatest menace to our social order...

I stand or fall by my refusal to accept as a necessary condition of our future a permanent army of unemployed. On the contrary, we must make it a national principle that we will not tolerate a large army of unemployed and that we will arrange our national economy to end our present unemployment as soon as we can and then to take wise measures against its return.       FDR - 9/30/34


(Thoughts for a much-anticipated speech tonight by President Obama. Via "Freakonomics.")
Posted by Bruce Schmiechen at 9/08/2011 No comments:

In the wake of Willard "Mitt" Romney rejecting Governor "Good Hair" Perry's nutty Ponzi Scheme rhetoric regarding Social Security during last night's GOP debate, Romney is getting kudos from the Beltway punditry as the "not crazy" candidate hoping to hustle his way to the Republican Presidential nomination.


Jared Bernstein notes that if he's elected president, Mitt Romney has promised to "immediately move to cut spending and cap it at 20 percent of GDP." That's crazy with the economy so sluggish, but in fact, it's even crazier than that. Here are budget projections for 2013 from the OMB: