"We don't have a Medicare problem, we have a health care cost problem"

Paul Krugman makes the essential (and often deliberately obfuscated) point that is central to any discussion of Medicare and health care costs:


Medicare actually does a better job of controlling costs than private insurers — not remotely good enough, but better.

If you look at Medicare in isolation, the cost rise looks terrible, because it is: 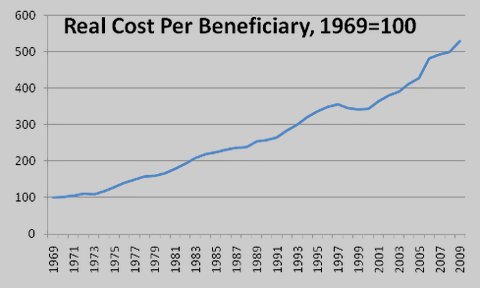 But it looks a bit different if you look at private insurance, too: 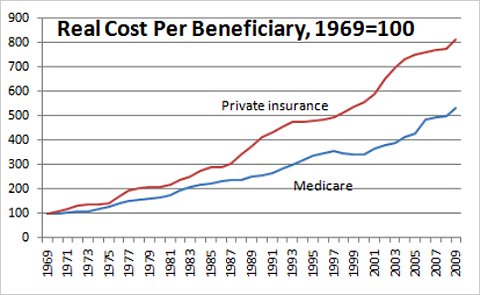 If Medicare costs had risen as fast as private insurance premiums, it would cost around 40 percent more than it does. If private insurers had done as well as Medicare at controlling costs, insurance would be a lot cheaper.

It’s a mystery why anyone claims that shifting more people into private insurance is a good idea. Actually, no, it isn’t a mystery; it’s an outrage.

The most significant fact about Medicare is not that it's too costly,  but that it saves Americans a lot of money.

Throwing seniors - of all people - back into the private insurance market would mean vastly greater % of GDP eaten up by health care costs. Or sick people simply going without care.

Neither option is acceptable.  Except perhaps to privatization fanatics and "free-market" ideologues like Congressman Paul Ryan (who admits to being inspired to go into politics by Ayn Rand, who conjured sociopathic narcissism into a pop philosophy that drives much of the libertarian movement.)
Posted by Bruce Schmiechen at 6/12/2011 No comments: Links to this post

Clinging to the theory... 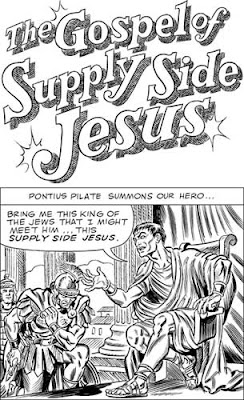 Sometimes, it can be fun to get inside a crazy worldview to ask how it deals with contradictory evidence. For example, how do creationists reconcile their view that all plants and animals were created in their current form around 10,000 years ago, with fossil evidence of life forms dating back hundreds of millions of years?

In this vein, it's worth asking how the proponents of deficit reduction think that lower deficits will lead to increased growth and job creation in an economy mired in a severe slump? There is not an easy answer.

There is a standard "econ 101" story about how reducing deficits can boost the economy. The theory goes that if the government reduces its deficit, and therefore borrows less, it will reduce interest rates. Lower interest rates will, in turn, give firms incentive to invest more.

Lower interest rates should also cause the dollar to decline, since it will make US government bonds and other dollar assets less attractive to foreign investors. If the dollar falls in value, then our goods will be more competitive on world markets. This will cause us to import less and export more, thereby creating jobs.

However, is this what the deficit hawks believe will happen now? The interest rate on 10-year Treasury bonds is already down to 3.0%. Assuming a 2% inflation rate, this translates into a real rate of about 1%. How much lower do the deficit hawks think interest rates will fall if we were to sharply cut the deficit? Furthermore, how much more investment do they think we can induce even if we got a large reduction (for example, 0.5 percentage point) in real interest rates? 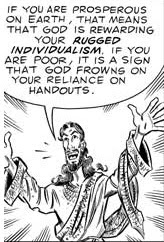 Do they think that this sort of decline in interest rates will send the dollar tumbling and thereby improve our trade balance? Against which currencies will a lower interest rate cause the dollar to fall sharply?

Neither of these stories really passes the laugh test. At best, we may hope to see modestly lower interest rates if cutting the budget deficit slows growth further. But there is no reason to expect any future decline to have any more impact than the recent decline in the 10-year Treasury rate from 3.6% in the winter to near 3.0% present this month.

There is another story that the deficit hawks occasionally push. This one says that if we lay off workers in the public sector, that will increase employment in the private sector. The story here is, presumably, that mass layoffs of public sector workers will depress the wages of workers further, thereby making it more profitable for employers to hire them. There's a simple problem in this picture. In order for wages to actually fall, the additional employment in the private sector must not be as large as the job loss in the public sector.