Economist and former consultant to Presidents Ronald Reagan and G.H.W. Bush, Bruce Bartlett - who I quote frequently and consider an authentic conservative, as opposed to the right-wing radicalism dominating the GOP - has issued a blistering critique of Paul Ryan, published in both The Fiscal Times and Capital Gains and Games blog: 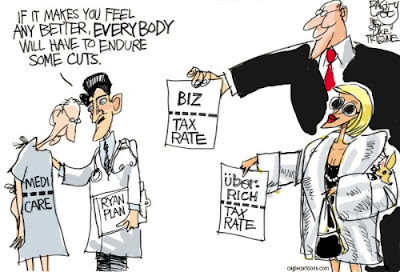 House Budget Committee Chairman Paul Ryan’s budget plan has been the talk of Washington this week. Most of the discussion has revolved around his proposal to privatize Medicare and slash many federal programs to the bone. Less attention has been paid to the tax side of Ryan’s plan, which is every much as radical as the spending side.

One would think that a comprehensive budget proposal designed primarily for the purpose of reducing budget deficits and the national debt would put at least some of the burden on the revenue side of the equation. First, it would reduce the need to cut spending so heavily and improve the chances of passage; unless Ryan is only interested in scoring points with the Tea Party crowd...